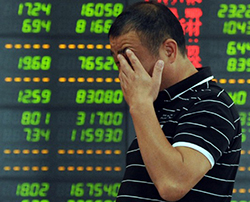 CHINA’S economic slowdown and a sharp fall in its stock market herald not a crisis but a “necessary” adjustment for the world’s second biggest economy, a senior International Monetary Fund official said on Saturday.
Fresh evidence of easing growth in China hammered global stock markets on Friday, driving Wall Street to its steepest one-day drop in nearly four years.
“Monetary policies have been very expansive in recent years and an adjustment is necessary,” said Carlo Cottarelli, an IMF executive director representing countries such as Italy and Greece on its board.
“It’s totally premature to speak of a crisis in China,” he told a press conference.
He reiterated an IMF forecast for a 6.8 percent expansion in the Chinese economy this year, below the 7.4 percent growth achieved in 2014.
“China’s real economy is slowing but it’s perfectly natural that this should happen … What happened in recent days is a shock on financial markets which is natural,” he added.
China’s stock markets have fallen more than 30 percent since mid-year. Following a slew of poor economic data, Beijing devalued the yuan in a surprise move last week.
Cottarelli said the IMF would discuss in coming months with Chinese authorities their decision to weaken the currency.
China is eager for the yuan to join the IMF’s Special Drawing Rights basket of currencies. But the fund is considering extending the current SDR basket by nine months until September 30, 2016.Advertisement