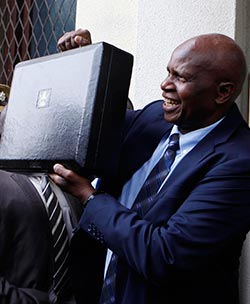 A TEAM from the International Monetary Fund (IMF) is expected in Zimbabwe next week to review the government’s economic policies and examine possibilities of future funding.
Market watchers however say the IMF was not expected to loosen its purse-strings for Zimbabwe any time soon because Zimbabwe is still in arrears on its debt repayments.
According to the IMF, the country’s external debt reached $12.5 billion in 2012with nearly half of the obligations, about $6.7 billion, in arrears.
In a statement, the IMF team said it would review issues such as credit growth, monetary expansion, interest rate growth, banks performance and capital adequacy soundness, fiscal policies, as well as current account movements.
The IMF stripped Harare of its voting rights in 2003 and nearly ejected the country in a rare move for the Washington-based institution in 2006. The restrictions were imposed after Zimbabwe fell behind in repayments to the Fund.
But in June, ahead of fresh elections, the organisation said it would work with the country for the first time in more than a decade although ruling out new cash advances.
IMF managing director, Christine Lagarde, announced a Staff Monitoring Programme (SMP) for the country adding its successful implementation “would be an important stepping stone toward helping Zimbabwe re-engage with the international community.”
Following his appointment as Finance Minister after the June 31 elections, Chinamasa said he would stick with the plan proposed by the IMF which is not a particular favourite of his boss, President Robert Mugabe.
The minister said he had urged a new approach for Zimbabwe during meetings with the IMF and other organisations in Washington.
“I held a number of meetings with the IMF, World Bank, the African Development Bank, African Export Import Bank, International Finance Corporation in Washington where I emphasised that the one size fits all solution has left Zimbabwe at a standstill position,” he said.
Zimbabwe’s huge debt pile is also said to be preventing the country from tapping external financing.Advertisement