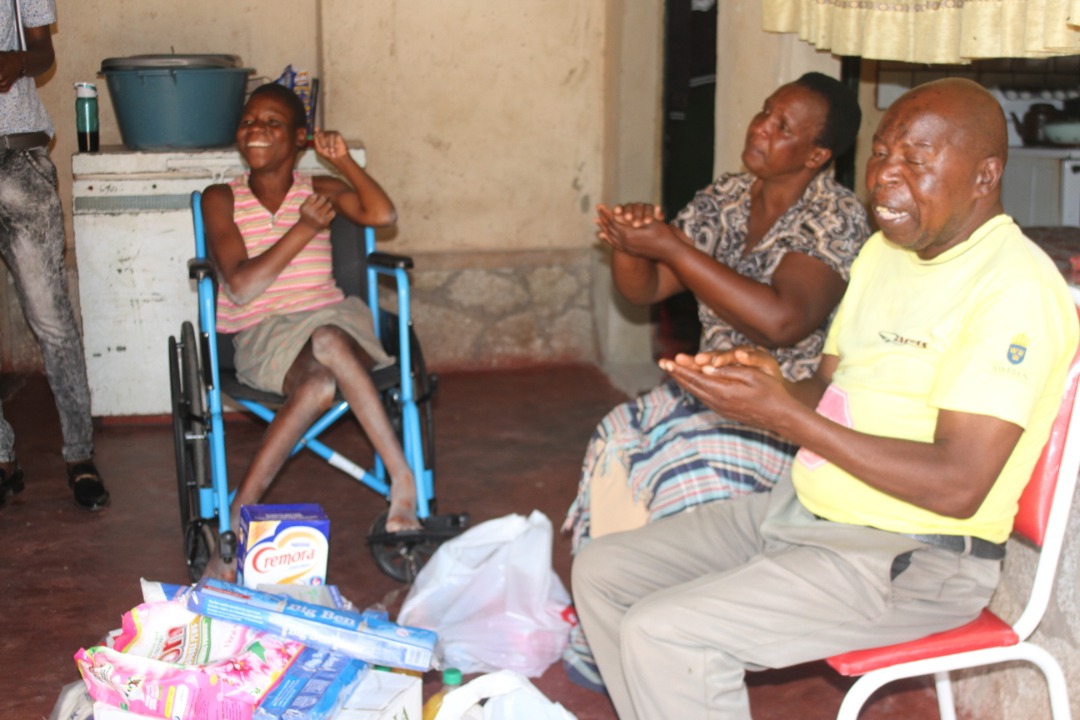 Gloria Dzora with her keepers
Spread This News
By Staff Reporter

A 27-year-old Domboshawa woman who has never walked in her life as she was born with a spinal dysfunction, is now set to go to school for the first time and pursue her dreams following a wheelchair donation by Impala Car Rental.

Gloria Dzorwa was left in the custody of relatives at the age of seven her father dumped her when her mother died.

Her hand-propelled wheelchair was sourced by the Alfred Dondo Foundation.

“This wheelchair is going to help me pursue my dreams. I have always wanted to go to school but I have not been able to do so. But now that I have this wheelchair, I will start by getting some education so that I can have something to do on my own,” Dzorwa said.

Deprived of family love at the age of just seven when her mother died, hers is a story of torment, pain and misery.

Soon after her mother’s death, her father immediately took his other three able bodied children, left for Mozambique and has never been seen again.

But the father’s younger brother and his wife, having a heart of gold, took custody of the girl and have been staying with her for the past 20 years.

They have had to take shifts to carry her from one place to the other as she was completely immobile.

She has not been able to go to school either.

Their fortunes however took a turn for the better last Friday when they, for the first time, received a wheelchair donation from the Alfred Dondo Foundation.

Gloria’s foster mother, Skeva Rubero, could not hold back her tears as she received the wheelchair and some groceries for their upkeep.

Rubero’s tears were a testimony of how life has been unbearable for Gloria who had to crawl around the yard as she could not go anywhere beyond the yard.

The foster mother, together with her husband Arthur Dzora took over the guardianship of the child after her father dumped her and left for Mozambique.

“She had no wheel chair and going around was a major challenge,” narrated Dzora as she wiped away tears.

“Life has not been easy for her because even going to school has been a major challenge due to her condition,” she said.

For the past 20 years, the couple has been staying with her, it has seen a lot and the donation came as a huge relief for them.

“We have seen a lot and the major challenge was a wheel chair and from the bottom of my heart, I want to thank Impala Car Rental for their kind gesture. This will go a long way in alleviating her challenge,” she said.

“I want to thank Impala Car Rental (the company behind the Alfred Dondo Foundation) for coming to assist us because we have been in a difficult situation. Wheel chair and the groceries will take us somewhere,” she said.

“Being touched by her situation, our company, through Alfred Dondo Foundation has found it fit to assist.

“Of course we have come with a wheel chair and groceries but we will continue to find ways of assisting her,” she said.