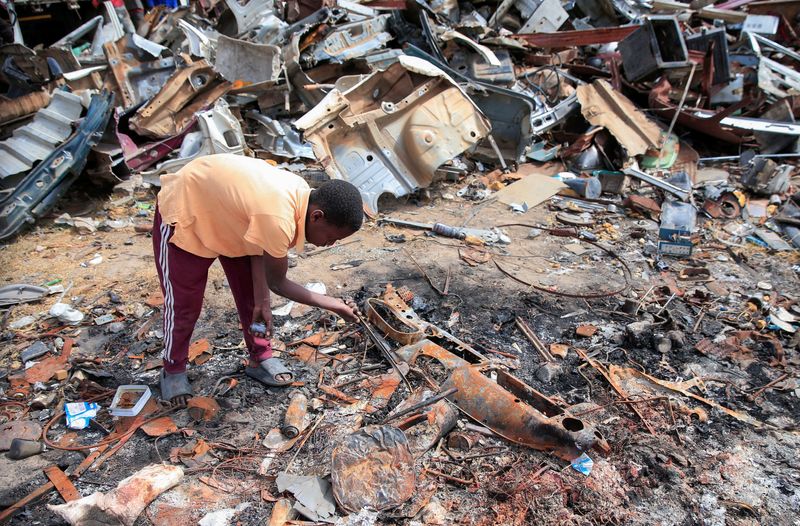 By Nyasha Chingono I Reuters

HARARE: Shepherd Chowe pushes a cart filled with tins, iron rods and other metallic objects down a dusty pathway in Hopley, a poor settlement about 15 km west of Zimbabwe’s capital, Harare.

It is 11 a.m. and Chowe, 46, has arrived at a scrap yard where dozens of metal scavengers await to sell their wares. For two sacks, Chowe gets paid $6.

“I start moving around the township at 8 a.m. … asking people for scrap metal or anything metallic they are not using anymore,” Chowe said, adding that on a good day he takes home $40.

Chowe is among Zimbabweans selling scrap metal for survival as the cost of living soars, piling pressure on a population already facing food shortages and high unemployment, stirring memories of economic chaos years ago under veteran leader Robert Mugabe’s near four-decade rule.

Annual inflation, which hit 256.9% in July, has cast a shadow over President Emmerson Mnangagwa’s bid to revitalise the economy.

By selling scrap metal, Chowe can afford to pay rent, buy food and pay school fees for his two daughters.

“Scrap metal has given us hope,” Chowe said.

Zimbabwe’s steel industry has been struggling since the collapsed of the Zimbabwe Iron and Steel Company (Ziscosteel) more than a decade ago.

However, in recent years, small steel producers working with scrap yard dealers are picking up the pieces.

“These scavengers help the steel industry which we supply. Sometimes they (steel makers) lack money to pay us, but the metal is always available,” scrap yard owner Fungai

Mataga said, as workers loaded metal into a truck headed for Kwekwe in the Midlands, the home of steel manufactures.

“They all come here to sell (metal) for survival,” he said.

The scrap metal trade is not illegal in Zimbabwe, but has raised concerns about vandalism of infrastructure including that of state-owned National Railways of Zimbabwe, which has called for the trade to be regulated.

Every day he wakes up at 5 a.m. to walk 10 km to Glen Norah, a township west of Harare, his hunting ground for metal.