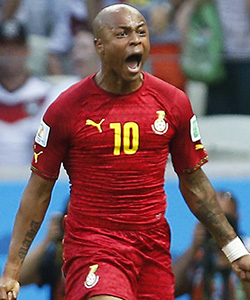 GERMANY striker Miroslav Klose came off the bench to score a record-equalling 15th World Cup goal and salvage a 2-2 draw against Ghana in a pulsating Group G game on Saturday.
Klose, with his first touch of the game, poked home at the back post from a corner in the 71st minute to move level with former Brazil striker Ronaldo.
Ghana, who trailed to Mario Goetze’s goal early after the break, stormed back to level through Andre Ayew and take the lead when Asamoah Gyan lashed home but Klose secured a point to leave Germany top of the group on four points from two games.
After a cautious, evenly-balanced first half, the match came alive in the 51st minute with Goezte putting the Germans ahead with a downward header that came off his knee before beating Fatawu Dauda in the Ghanaian goal.
But the Africans hit straight back, Andre Ayew outleaping the towering figure of Per Mertesacker in the German defence to head his side level on 54.
Nine minutes later, Ghana took the lead with Gyan breaching the German back line and firing a right foot shot past goalkeeper Manuel Neuer.
Germany coach Joachim Loew turned to experience, throwing on Klose and Bastian Schweinsteiger and it proved an inspired switch with Klose netting the goal that keeps the Germans in contention to reach the second round for a remarkable 16th consecutive World Cup.
Ghana sit third in the group on one point with United States (three points), playing bottom side Portugal on Sunday.
This was the 800th match in the history of the World Cup and was a fitting tribute to the tournament.
It marked Mertesacker’s 100th German cap and also saw the Boateng half-brothers face each other for the second World Cup in a row. Jerome played the first half for Germany while Kevin-Prince played for Ghana.Advertisement