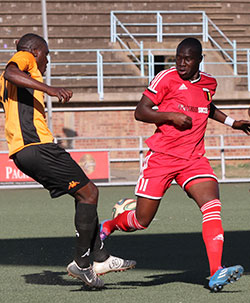 Harare City 4-1 Bantu Rovers
AGRIPPA Murimba scored a double as Harare City crushed Bantu Rovers in an entertaining Castle Lager Premier Soccer League match at Rufaro on Monday.
The Harare City striker beat an offside trap by Bantu Rovers defence after 13 minutes to put City ahead while Phineas Bhamusi and substitute Crybert Muvhuti weighed in with a goal each.
Bukhosi Sibanda scored the only goal for Bantu Rovers as veteran striker Obadiah Tarumbwa’s penalty drew a fine save from goalkeeper Maxwell Nyamupanedengu following a handball by David Kutyauripo in the penalty area.
The comprehensive victory, City’s third in the campaign so far, saw them leaping to 13th place on the league table with 10 points while Bantu Rovers dropped to 14th place with the same number of points.
Harare City started brightly from the first whistle as the aggressive Murimba and Martin Vengesayi threatened with some good raids and it was from one of those raids that Murimba gave his team the lead.
But Bantu levelled matters on 54 minutes with Sibanda heading home following a cross from Lawson Nkomo.