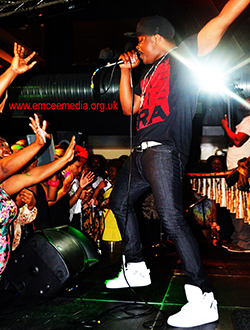 AGAINST a background of cancelled Zimbabwean s​hows in the UK since September 2014 due to visa related complications, Nox made an ‘Against All Odds’ trip for his December UK tour alongside Freddy Gwala from South Africa.
Phaab Entertainment coordinated the tour which tested their promotional resilience. The group Platform One was also part of the bill but they did not make it for the joint tour due to visa processing issues.
Still, Nox and Freddy ‘Amadamara’ Gwala arrived in England on Saturday 20 December and made their first stop for the lined up concerts in Coventry.
Even though the concert was not well attended, the two artists gave heartfelt performances with Freddy Gwala opening for Nox who wowed fans with a flawless performance to the finishing clock-tick.
Nox explained to fans how it had been difficult to get visas due to the Ebola scare around the globe.
Speaking to this reporter after his performance, Nox said: “I did not expect this particular show to go on because we got our visas yesterday, and we had to leave on the same day.
“I had already written off the tour due to visa delays but I thank God we finally managed to travel “.
On Christmas Eve, Nox had a concert in Northampton at the Pinjuib Nite Club with a much better attendance and he put the roof on fire.
Speaking after the show the Ndinonyara crooner said: “This was a very good show, people are happy, and I’m glad I made them feel that way.
“The attendance was great, I’m sure it’s because people now believe that I’m really here now”.
The 27th of December saw Nox perform at Oxygen Nite Club in Leicester and this was a huge success.
To round off the year Nox is billed to perform on New Year’s Eve at Dunstable Leisure Centre. He flies to Scotland soon after where he will perform in Glasgow on the 3rd of January.
Nox is currently riding high with his 2014 Mixtape which can be downloaded on Soundcloud and his video to the song Zvandadiwa which has taken over from where his hit song Ndinonyara left off.
Nox – Face to Face