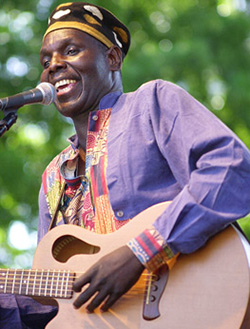 CLAD in white linen trousers, black and white shirt, Oliver Mtukudzi, affectionately known as Tuku, had mostly Zimbabwean fans in South Africa on their feet, dancing all night on Saturday at Ekurhleni Boksburg Hotel in Johannesburg.
True to form and never one to disappoint, Tuku delivered a non-stop three-hour, electrifying performance, churning out both new and old favourite tunes to his growing legion of fans who sang along with great energy and gusto.
As fans warmed up to tunes like ‘Shamiso’, they began to chant Zvirikufaya, hatidzokere’ the widely circulated videos of Zimbabweans in the diaspora and at home, demonstrating why they are happy to be where they are.
“It’s not just a career (music) to me, it is part of my life,” Tuku told NewZimbabwe.com in an interview before his show in Johannesburg.
What is striking about the tall, lanky musician is his humility, despite his phenomenal success both at home and abroad which he brushes aside as something that is just him.
“I am not acting – it’s who I am. I am a human being just like anybody else. I am just lucky that I happen to be successful in the arts industry but it is not something I have to show off about,” said the soft-spoken musician.
The seemingly ageless and energetic musician is actually going to be releasing his 63rd album next month called ‘Mukombe weMvura.’
“Every piece of (my) music, to me, is like a thirst quencher which quenches one’s thirst”, explained Tuku, adding that this new project is going to be different from past releases in that it was recorded in front of a live audience.
“Depending on the marketing guys the album should be out next month. It was recorded at Pakarepaye and it talks of things that I have never spoken about because it is now 2014, which is the future.”
Tuku has had a career spanning over several decades, that started when he was playing with the Wagon Wheels 1975 and his list of achievement is not anything new.
Challenged by the rise of younger musicians, and of course time, the 62 year-old Tuku however, scoffs at any prospect of ever retiring.
“I will keep on it, to me music is not a career, it is who I am like I said earlier, how can one retire from being themselves,” he said as a parting shot before going to deliver yet another five-star performance.Advertisement