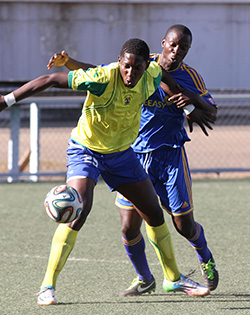 Harare City 1-0 Chapungu
SUBSTITUTE Benson Maglasi scored the goal that may have secured Masimba Dinyero’s job as the substantive Harare City coach for the rest of the season as his 83rd minute strike gave the Sunshine Boys a hard earned win at Rufaro on Saturday.
The former CAPS United midfielder, who replaced an ineffective Osborne Makuradare in the second half, hit a sweet volley from the edge of the 18 yard box that nestled into the bottom left corner, past diving Stephen Mazingi in goals for Chapungu.
It was Dinyero’s third match as caretaker since Bigboy Mawiwi was fired and he has managed an impressive two wins and a draw.
The match started off slowly with both sides sizing each other, creating few scoring opportunity but Harare City had the lion’s share of possession with the attacking pair of Martin Vengesayi and Francisco Zekumbawire causing all sorts of problems for the Chapungu defence.