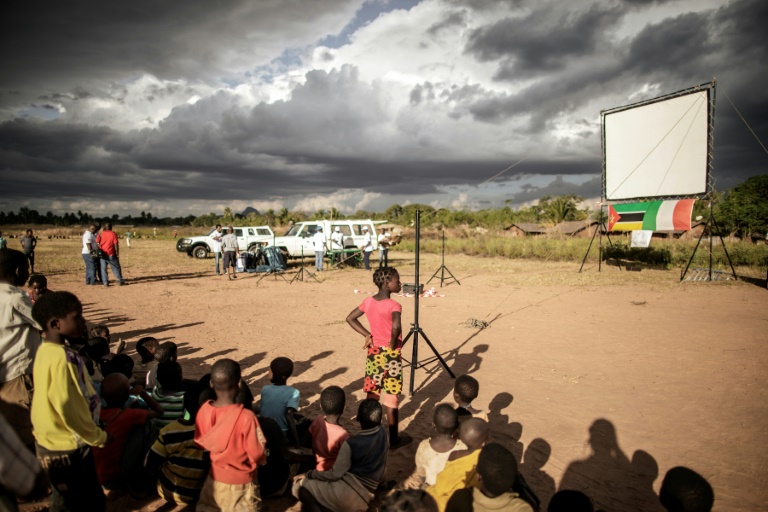 In front of a large screen in a dusty field in remote northern Mozambique, a crowd is gripped by the second World Cup quarter-final, desperately willing Brazil to victory.

The project to show live football for free in the remotest parts of Mozambique is a novel attempt to provide a rare night of entertainment and also spread public health awareness.

On Friday, the first quarter-final between France and Uruguay began in harsh daylight, rendering the canvas screen unwatchable.

Local barefooted players instead kicked around a ball made of plastic bags as other villagers listened to the commentary on large speakers until sun sank below the horizon.

The village of Alua has no mains power and only a few wealthier individuals have televisions powered by generators, and they charge other residents to watch.

“We usually have to pay,” Leonardo Joao Batista, sitting a few rows from the front, told AFP.

It is often too expensive for Batista, a farmer and father of seven children.

“Today you do not have to know people to get in,” he said.

Many locals, including Batista, had little idea who was playing in the quarter-finals or that the tournament is being held in Russia.

But the crowd soon developed a fierce loyalty to France in the first quarter-final, as several of the team’s players have African heritage. They transferred their loyalty to Brazil in the second match.

After France won the first game, the audience erupted into wild cheers whenever Brazilian star Neymar appeared on screen.

Portugal, Mozambique’s former colonial ruler, was eliminated in the Round of 16, and many fans pinned all their hopes on Brazil.

Earlier, the large screen was erected on rough ground and held firm with guy-ropes while organisers crisscrossed Alua village with a megaphone to announce that the broadcast was about to begin.

Between the two games, songs, dances and short plays spread messages on how to detect early warning signs of cancer and when to seek treatment — though medical facilities are basic and very scarce.

One mother, Lourdes Darin, promised to go to the health centre urgently to learn how to examine breasts and detect any problems.

“Football is a way to reach a lot of people, so we combine sport and health education,” said Bastos Azarias, of the Mozambican Ministry of Health, a project partner.

“It’s a good way to convey information,” agreed Caetano Alberto, a teacher enjoying the night out.

“You have to go to the hospital to be examined,” he said, summarising the health guidance.

The tour moves on

On Saturday, it is the turn of the inhabitants of Namapa, 30 kilometres (20 miles) further north to gather in front the screen.

“Every day we change villages or city, and the final on July 15 will be inside the old fortress on the Ilha de Mocambique,” said Fabrizio Falcone, director of CinemArena, the Italian initiative behind the broadcasts.

“Everyone loves football, everyone wants to see the matches.”

In the Brazil game, the final whistle brings deep disappointment as the Selecao suffer a surprise 2-1 defeat to Belgium and go out of the World Cup.

The buzz of the generator ceases, the screen goes out and villagers drift into the dark night, their heads full of images.

“Since my wedding here, I’ve never seen such a party,” said Teresinia Antonio, his child wrapped in a scarf on his back.