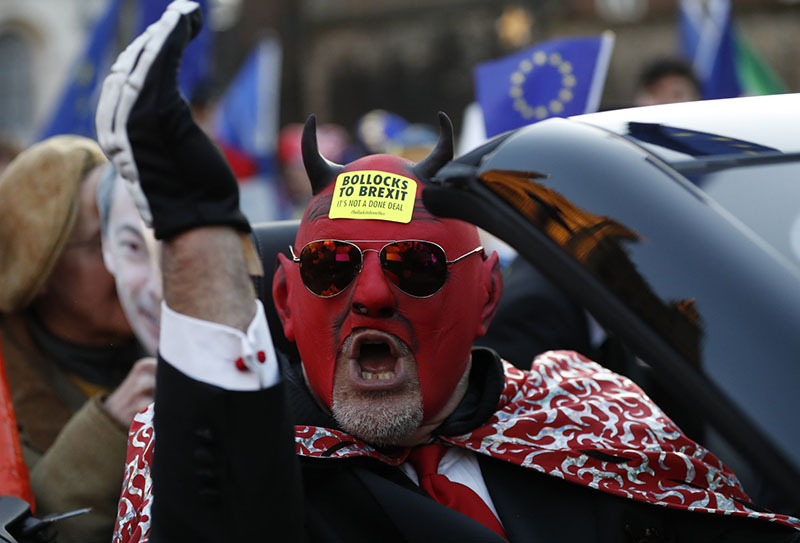 An anti-Brexit demonstrator shouts out as he wears a mask with a sticker attached, outside the Palace of Westminster in London
Spread This News

LONDON: It’s said that history often repeats itself — the first time as tragedy, the second as farce. Many Britons feel they are living through both at the same time as their country navigates its way out of the European Union.

The British government awarded a contract to ship in emergency supplies to a company with no ships. It pledged to replace citizens’ burgundy European passports with proudly British blue ones — and gave the contract to a Franco-Dutch company.

It promised to forge trade deals with 73 countries by the end of March, but two years later has only a handful in place (including one with the Faroe Islands).

Pretty much everyone in the U.K. agrees that the Conservative government’s handling of Brexit has been disastrous. Unfortunately, that’s about the only thing this divided nation can agree on.

With Britain due to leave the EU in six weeks and still no deal in sight on the terms of its departure, both supporters and opponents of Brexit are in a state of high anxiety.

Pro-EU “remainers” lament the looming end of Britons’ right to live and work in 27 other European nations and fear the U.K. is about to crash out of the bloc without even a divorce deal to cushion the blow.

Brexiteers worry that their dream of leaving the EU will be dashed by bureaucratic shenanigans that will delay its departure or keep Britain bound to EU regulations forever.

“I still think they’ll find a way to curtail it or extend it into infinity,” said “leave” supporter Lucy Harris. “I have a horrible feeling that they’re going to dress it up and label it as something we want, but it isn’t.”

It has been more than two and a half years since Britons voted 52 percent to 48 percent to leave the EU. Then came many months of tense negotiations to settle on Brexit departure terms and the outline of future relations.

At last, the EU and Prime Minister Theresa May’s government struck a deal — then saw it resoundingly rejected last month by Britain’s Parliament, which like the rest of the country has split into pro-Brexit and pro-EU camps.

May is now seeking changes to the Brexit deal in hope of getting it through Parliament before March 29. EU leaders say they won’t renegotiate, and accuse Britain of failing to offer a way out of the impasse.

May insists she won’t ask the EU to delay Britain’s departure, and has refused to rule out a cliff-edge no-deal Brexit.

Big political decisions have been postponed, as May’s minority Conservative government struggles to get bills through a squabbling and divided Parliament. Major legislation needed to prepare for Brexit has yet to be approved.

Britain still does not have a deal on future trade with the EU, and it’s unclear what tariffs or other barriers British firms that do business with Europe will face after March 29.

That has left businesses and citizens in an agonising limbo.

Rod McKenzie, director of policy at the Road Haulage Association, a truckers’ lobby group, feels “pure anger” at a government he says has failed to plan, leaving haulers uncertain whether they will be able to travel to EU countries after March 29.

McKenzie says truckers were told they will need Europe-issued permits to drive through EU countries if Britain leaves the bloc without a deal. Of more than 11,000 who applied, only 984 — less than 10 percent — have been granted the papers.

“It will put people out of business,” McKenzie said. “It’s been an absolutely disastrous process for our industry, which keeps Britain supplied with, essentially, everything.”

He’s not alone in raising the spectre of shortages; both the government and British businesses have been stockpiling key goods in case of a no-deal Brexit.