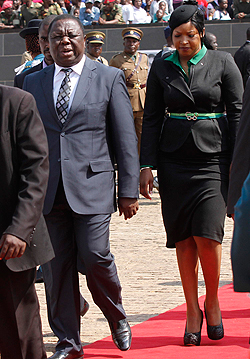 JUST how did my fellow Zimbabweans become such hypocrites? How really shocking – in current day Zimbabwe – is Elizabeth Tsvangirai’s reported love affair with Kennedy Ngirazi, the father of her youngest child?
True, Morgan Tsvangirai’s love web, which is a lot like a storyline from “Desperate Housewives”, is titillating for a society that loves a scandal. Little wonder then, that news that Liz – who wed the former Prime Minister only last September – has been playing away from home with her ex made headlines.
But is this story really worth all the hype, in a society like ours? Can Elizabeth be faltered for her actions? I certainly don’t think so. After all, Liz is a beautiful young woman who I believe fell in love with the idea of becoming Zimbabwe’s First Lady. I very well doubt she was genuinely swept off her feet by our Morgan. Theirs was so obviously material love.
Now, we all know our Morgan is not most eye-catching specimen to look at, but I’m certain he must be quite a charmer. Material type of love is a common phenomenon in our modern society. Are not most people marrying for money?  Are not many people dating for money?
I am a young lady myself and l can confirm that among my peers, money plays a crucial role in enticing one’s affection. Are we not raised in a society where as soon as you advise your aunt that you want to marry, you are interrogated as to the financial position of your potential spouse? Is it not prudent in our society to marry a rich man? If Elizabeth married for the money, then big up to her!
Besides, people shouldn’t easily forget that this lady entered into a marriage with a man with a whole load of baggage – children all over the place, let alone lovers. I am sure the two had major trust issues. And that is an awesome recipe for a potentially disastrous marriage. Somewhere along the line, it appears our beloved Morgan lost sight of what was important in his chase to unseat Robert Mugabe. You can see this from the e-mails written by Liz to her lover seeking advice on how to go about purchasing and importing her luxurious motor vehicles. It is this agenda that resulted in the two having a rendezvous in Cape Town.
Morgan, like most men, slept on the job. He took the Madam for granted and she fell into the hands of someone else. Now many of you men are regrettably making the same mistake. Most of you will find themselves in the predicament our former Premier is in today. To put it bluntly, you are going to get played. Women are very funny creatures, we thrive on attention. It is our ultimate high. You withdraw attention, and of course affection, best believe we may just look for it elsewhere.Advertisement

Don’t get me wrong, I am not at all an advocate for adultery, I am merely a social commentator who tells it like it is. There was once a time it was an abomination for married women to cheat. It was totally unheard of. Times have changed. Most married women I know are having, or have had affairs in their marriages. Who are these married women having affairs with, one may be tempted to question? Funny enough, with other married men. This is what is happening in Zimbabwe today.
So, why are my fellow Zimbabwean such hypocrites? Many of you are wagging your tongues so loudly; one would assume you have no skeletons in your own closets. In any event, is it not rumored that our First Lady cheated on her husband with Robert Mugabe while the President’s then wife, Sally, was on her death bed?
Why don’t we leave poor Lizzy alone and focus on more important issues? Was the hacking and subsequent publication of her e-mails not an invasion of her constitutionally protected privacy? Why are we condoning this unethical if not criminal act perpetrated on her?
In my view, poor Liz is the victim here.  Even the Bible in John 8:7 (King James Version) says: “Let him with no sin among you cast a stone at her.”