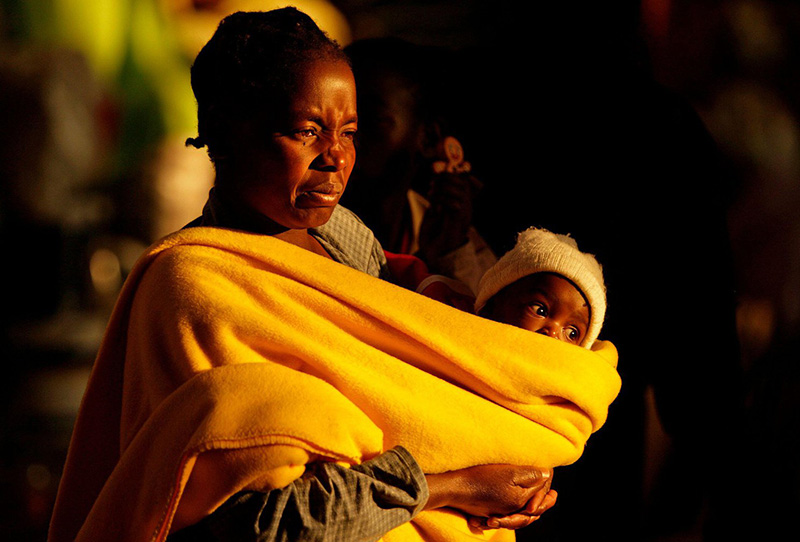 Doreen Chasi lost her brother and husband in South Africa’s 2008 xenophobic attacks in which nearly 100 foreign nationals were killed. This year, it all seems to be happening all over again.

“They destroyed my stall,” Chasi told openDemocracy. “All the produce I had just purchased for resale was confiscated. That reminded me of the 2008 attacks. They have added salt to a wound which was starting to heal. I am so terrified.”

Chasi is a Zimbabwean immigrant in South Africa’s Soweto Township. She spoke to this website following January’s spate of violence against foreign nationals in South Africa.

The attacks, meted out by vigilantes calling themselves Operation Dudula, started in Soweto towards the end of 2021. They have spread to other townships, including Alexandra, Youville, Hillbrow, Tembisa and Daveyton.

“Foreigners must leave South Africa and go back to their countries. They should leave us with peace. Pack your stock and leave,” Operation Dudula spokesperson, Agnes Malatji told openDemocracy.

Gabriel Arumando of Mozambique knows the danger of such sentiments all too well.

“In 2008 I lost my three-month-old son who was burned to death when they set my shack alight. Now they have started again,” he told openDemocracy in South Africa’s Alexandra township.

The immediate trigger for the current wave of xenophobia appears to be a decision by the South African government to end a 12-year programme that has allowed more than 200,000 Zimbabweans to live in the country without meeting stringent immigration laws.

The Zimbabwe Exemption Permits (ZEP) were first issued in 2009 and were renewed every four years, ending in December. Instead, the ministry says, holders of the permits must now “regularise their stay through normal immigration laws” before the end of 2022.

“Since the day the minister announced that we have 12 months to legalise our stay, we have been threatened, harassed and humiliated by locals,” said Zimbabwean Fortune Ndebele, who lives in Alexandra Township. “They are promising us hell on earth when the grace period lapses.” Alexandra was one of the worst-hit areas in the 2008 xenophobic violence.

But beyond the immediate trigger is an unemployment crisis. “We believe the root of the problem is that the ANC government has implemented macro-economic policies which have failed to transform the lives of our people,” said Phakamile Hlubi-Majola, spokesperson of the National Union Metal Workers of South Africa (NUMSA) – one of the biggest labour unions in the country. “Under their reign, South Africa has become the most unequal society on earth, with crippling poverty and extremely high unemployment.”

South Africa’s unemployment stands at 32.6% and about 55.5% of its people live in poverty, according to the World Bank. The country’s department of labour, which uses an expanded definition that includes those who have given up looking for work, put unemployment at 46%. Add to that the devastating economic impact of COVID-19, which resulted in the loss of more than two million jobs in the first three months of the pandemic.

In this biting situation, foreign nationals have become the scapegoats. In the lead-up to last year’s local government elections, in which the ANC took a beating, the leader of the rival Action SA party repeatedly made misleading comments linking foreigners to crime. Action SA, led by Herman Mashaba, was one of the success stories of the elections.

A number of ANC leaders have also used xenophobic tropes about foreigners taking jobs. Home affairs minister Aaron Motsoaledi has said he wants to pass legislation introducing quotas on how many foreigners a company can employ.

“There’s also this belief that South Africa has abundant resources for everybody. That’s nonsense. No country has the capacity to accommodate everyone who has problems in the country they come from,” he said. As health minister, he also regularly blamed the poor state of the health system on migrants.

Since the minister announced we have 12 months to legalise our stay, we have been threatened, harassed and humiliated

Even Julius Malema, the leader of Economic Freedom Fighters, who also bills himself as a Pan-Africanist, joined the pre-election anti-immigrant rhetoric, saying employers should desist from prioritising immigrants at the expense of South African citizens. Last month, he visited restaurants in the Gauteng Province to check the employment ratio between South African citizens and foreign nationals.

Malema now appears to have come to the conclusion that the problem is employers who prioritise foreign workers because they could exploit them. “Do not hate the foreigners – hate the owner of the restaurant, because those foreigners did not hire themselves,” Malema told openDemocracy.

It’s a theory shared by other Pan-Africanists in the country. Malema’s observation “is a starting point to exploring exploitation and how it is used to divide and conquer,” says Dr Metji Makgoba Makgoba, a political analyst who describes himself as a Pan-Africanist.

This perspective argues that by employing the least protected workers over nationals, South Africa’s white monopoly capital is pitting Black people against each other, in a race to the bottom: exploitation or unemployment.

But claims that migrants are a significant contributor to South Africa’s employment are hard to square with the evidence. They make up only 4% of the population, according to the labour department. Even in Gauteng, the province with the largest foreign-born population, only 8% of the working population are migrants, according to a 2014 report by the International Labour Organisation. “If we remove all foreign nationals today, unemployment will still be around 33.5% nationally and 45.5% for young people,” said NUMSA’s Hlubi-Majola.

Also hard to square is the view that migrant workers, unlike all others, are net-takers rather than net-givers to the economies where they invest their labour. “I am from Zimbabwe. I came to South Africa in 2004 and have established a logistics business which currently employs almost 45 South Africans and 17 foreigners,” business owner Sam Musara told openDemocracy.

Shenilla Mohamed, executive director of Amnesty International, said: “It is easy to blame foreign nationals, refugees and asylum seekers for the country’s high unemployment problems, but the fact of the matter is that an economy like South Africa cannot rely on local skills alone to grow and create jobs.”

It’s the perspective that the country’s unionists agree with. If anything, they say that politicians are fanning the flames of xenophobia to distract the masses from the fact that they are presiding over an economy that only works for a wealthy minority like themselves. “Radical changes need to be made to transform the South African economy in a meaningful way, so that it benefits the majority of people, and not a wealthy minority,” Hlubi-Majola said.