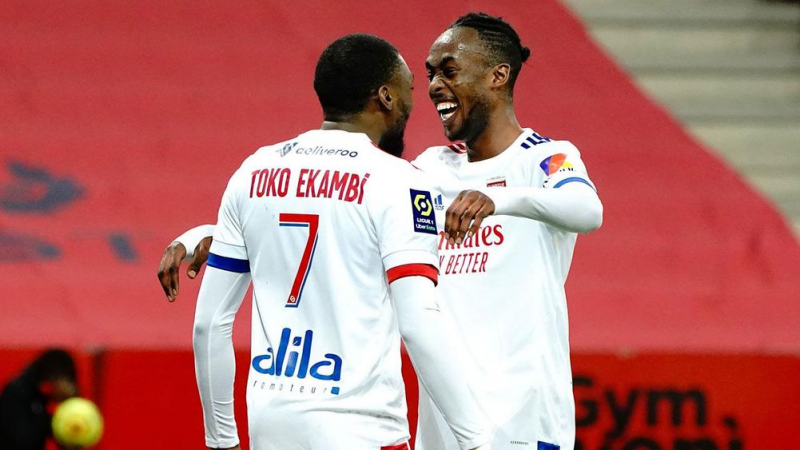 Zimbabwe international Tino Kadewere has lauded his combination with strike partners Memphis Depay and Karl Toko Ekambi after continuing with his rich vein of form when he scored in Lyon’s convincing 4-1 win over Nice in a Ligue 1 encounter played on Saturday.

The Warriors forward, who joined the club during pre-season, has scored six goals and made two assists in 15 outings for Lyon who are now perched at the top of the French Ligue 1 log.

Kadewere proved to be the match winner for Lyon again after being directly involved in three of Lyon’s goals which earned him the man of the match accolade.

The former Prince Edward schoolboy ensured Lyon got off to a strong start after winning a penalty that was converted by his captain Depay for the first goal.

Kadewere then scored the team’s second when he intercepted a Hicham Boudaoui pass and beat home goalkeeper Walter Benitez before the half-time break.

He then turned provider in the 63rd minute as he set up Cameroon striker, Karl Toko-Ekambi, with a squared pass into the box following a sweeping counter-attack.

It capped off another memorable evening for Lyon’s attacking trio of Kadewere, Depay and Toko Ekambi, who have scored 22 of Lyon’s 31 league goals this season.

Speaking to OLTV after the match, Kadewere said: “We are very happy. We needed to win after a tough match against Brest. We wanted to come back with the three points. This kind of match gives us confidence. We worked together. There is one match left before the break, we have to stay focused. We played well together, Toko Ekambi, Memphis, and myself everything is going well. It’s good for the whole attacking line to score.”

His Netherlands teammate Depay, formerly with Manchester United, was also full of praises for Kadewere and Cameroonian Karl Toko Ekambi after they both scored on Saturday.

Kadewere also felt they combined well with Depay and Ekambi. “We played well together, Toko Ekambi, Memphis, and myself everything is going well. It’s good for the whole attacking line to score,” he said.

Lyon manager Rudi Garcia was also impressed by the combination. “My strikers Tino and Karl are currently in the best form of their careers. Their effort and contribution keeps the team going forward. For me, both had a wonderful game, they can share the man-of-the-match award,” he said.