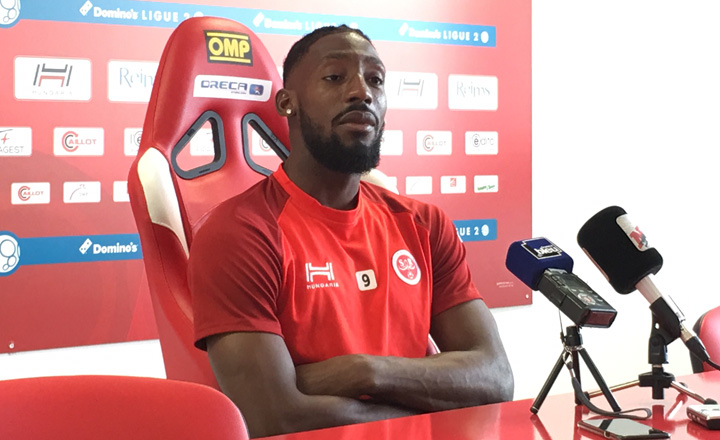 PARIS: As it does for many footballers, the day finally came when Anatole Ngamukol was told by his club it was time for him to move on.

Embarking on a new season in the French league , Reims decided it had no further use for the player who had helped the French side climb out of the second division. He’d turned 30 a few months earlier and hadn’t been scoring many goals. The club in northeastern France’s Champagne region wanted out of the contract.

Ngamukol, however, had other ideas. Without attractive job offers from other teams, with a family to feed and another kid on the way, the player who’d previously plied his trade in Spain and Switzerland decided he would rather stay in Reims to see out the last year of the two-year contract the club had signed with him less than 12 months earlier.

And that, he says, is where things got nasty.

Rather than let him try to play his way back into the side, Ngamukol says Reims packed him off to purgatory, sending him to train with its reserve team, where he was banned from playing any matches and sometimes made to practice alone, running loops around the pitch while coaches worked with his erstwhile teammates, honing their skills and tactics.

This cold shoulder was the team’s way, he suspects, of managing him out — applying pressure to get him to quit, thus avoiding honouring a deal that no longer suited the club.

In France, footballers use an English word to describe such treatment: “le loft.” Evoking an image of being locked in an attic, it refers to the no-man’s land where clubs park players they no longer want but cannot get rid of immediately or who, for one reason or another, have fallen out of favour with coaches and club officials.

Excluded from the first team, distanced from teammates, players subjected to the most extreme forms of “lofting” have described themselves as being suddenly ostracised, ordered to train with youth teams, the reserves or alone, and subjected to petty humiliations including the loss of access to lockers, parking places, showers and other facilities.

Speaking in an Associated Press interview, Ngamukol says Reims officials told him: “You’ll not get a single minute, no playing time at all, you won’t even be part of the pro team.”

The complete disappearance of the player who had made 29 appearances for Reims the previous season, when the club topped Ligue 2 to win promotion to France’s top flight, didn’t pass unnoticed. His son wanted to know why Daddy was no longer appearing on television. People stopped him during his grocery shopping in Reims to ask why he wasn’t playing.

“It’s a tough experience, especially knowing that I’d done nothing to merit being demoted to the ‘B’ team,” the 31-year-old says. “It’s a punishment.”

Often, players suffer their exclusion in silence and quietly agree to leave the club with a payoff, the French players’ union says. It says “lofters” are often fearful that complaining publicly will dissuade other clubs from hiring them.

“Most of all, they’re scared that if they sue their club then all of football will say, ‘We’re not taking this player because he’s not compliant and wants to defend his rights, and he won’t roll over if we have a problem with him.’ They prefer to take more malleable players,” says David Terrier, vice president of the National Union of Professional Footballers.

“So players don’t dare stand up to the clubs, because they are scared that they’ll be imprisoned by the football system and blacklisted,” he says.

He and another more famous former “lofter,” ex-Paris Saint-Germain star Hatem Ben Arfa, are both turning to French courts for redress. In both cases, their lawyers are arguing that in excluding the players from first-team action, Reims and PSG subjected Ngamukol and Ben Arfa, respectively, to workplace bullying.

Ben Arfa’s suit was filed Feb. 1 with a Paris labor tribunal. Considered one of the most talented French players of his generation, Ben Arfa joined PSG, France’s star club, in 2016. But after scoring twice in a French Cup quarterfinal in April 2017, he never played for PSG again to the end of his contract in June 2018, an exile of nearly 70 matches .

Why? Seemingly because the midfielder offended PSG’s president by criticising him in front of the club’s owner, says Ben Arfa’s lawyer, Jean-Jacques Bertrand.

“It was very banal, especially since it was said without malice,” Bertrand said in an AP interview. “Apparently, the president took it very badly.”

Outwardly, Ben Arfa put on a brave face. After the first 12 months without playing, he posted a photo of himself posing with an anniversary cake and the caption: “A year in the cupboard must be celebrated.”

But inside, his lawyer says, Ben Arfa was suffering.

“The aim is to make him crack,” Bertrand said. “The club did everything to push him to leave.”

The suit seeks 7 million to 8 million euros ($8 million to $9.1 million) from PSG in lost earnings and a symbolic 1 euro in damages for workplace harassment, he said.

Contacted for comment, PSG said it expects to be vindicated and “regrets” what it called the “stubbornness” of Ben Arfa and his attorney.

Ngamukol’s suit, backed by the players’ union, was filed Tuesday with a Reims local court. It argues that by parking him in the reserves, the club sought to exert “psychological pressure” to make him agree to an early end to their contract. It accuses both the coach and general manager of Reims of workplace harassment, which is punishable in France by up to two years imprisonment and 30,000 euros ($34,000) in fines.

The club declined to comment on the case to the AP. The Reims newspaper L’Union quoted the club president, Jean-Pierre Caillot, as saying, “We wanted to free him from his contract so he could continue on his path elsewhere. He didn’t understand that. We don’t harass or discriminate against anyone.”

The club fired Ngamukol in circumstances both sides dispute in October 2018. After three months without a team, he found a new club this January, signing with German third-division side Fortuna Cologne until the end of the season.

The rules that govern French football, signed by the players’ union, the French league and others, allows clubs to temporarily, but not permanently, send first-team players off to train in separate groups, for example if they’re not needed for upcoming matches or are recovering from injury. And coaches, of course, can field, or not field, who they want in first-team matches.

But the players’ union says French clubs are abusing the system and have growing numbers of “lofters” on their books. By its count, 145 players in Ligue 1 and 2 — more than 10 percent of the total player workforce in France’s top 40 clubs — have been parked, more or less permanently, on clubs’ sidelines this season.

Some simply aren’t playing well enough to be in their clubs’ first teams, the union says. But there also are others being punished because of contract wrangles or other disputes with their clubs, and young players on their first professional contracts that clubs have parked while waiting to sell them.

The highest-profile player in the doghouse this season is PSG’s Adrien Rabiot. Reportedly because he has refused to sign a new contract, the Paris club hasn’t fielded Rabiot since December, punishing itself as well as him, because the 23-year-old’s skills and presence have been sorely missed in PSG’s vulnerable midfield.

“Unfortunately, a lot of players find themselves in ‘lofts,’” Terrier, the union vice president, told the AP. “The impression, once again, is that football is a legal no-man’s land.”

“It’s a collective issue. There are many other players going through this and we have to say, ‘Stop!’” he says. “It is not easy but I want my kids to be proud of me and you have to uphold your dignity. When you are trampled on every day, it hurts psychologically.”