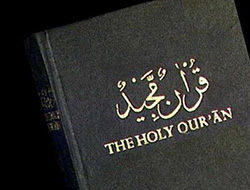 IT IS written in the book of Hosea

‘My people are destroyed for lack of knowledge: because you have rejected knowledge, I will also reject you, that you shall be no priest to me: seeing you have forgotten the law of your God, I will also forget your children’

Daniel tells us how to deal with this
‘In the first year of his reign, I, Daniel, understood from the books according to the word of the LORD to Jeremiah the prophet
I have no animosity towards primary and secondary education minister Lazarus Dokora, but I feel compelled to correct him on a lot of issues concerning what appears to be misguided views on Islam.
There are two ways of looking at it – biblically and historically. First, for the atheists, historically, the Muslims along with the Jews (yes the Jews) were responsible for capturing and shipping Africans to the Middle East and the West as slaves.
It is well documented that these Muslims shipped in excess of 140 million African slaves to their fellow Muslim brother countries and sold them there. What’s of particular interest is the viciousness with which they treated the slaves. Almost all the men were castrated, the women raped and if any offspring arose from the rape, the children were killed.
To this very day these Muslims are still castrating our brothers, selling them as slaves – Mauritania is a good example. The West is aware of all this but they turn a blind eye, after all these are just Africans.
History has shown that when it comes to evil, especially towards the African, the Whiteman is a pussycat compared to Muslims. If my fellow Africans knew things like this, then there would be no Muslim in Africa.
Mr Dokora is an ‘educated’ man. There is a fair amount of History books and literature on the deeds of these Muslims in Africa and none of it is good. For those with access to the internet, there are documentaries on this; Youtube has documentaries on this as well.
In short, just from these brief historical facts, no sane African should be propagating Muslim advancement in Africa. See what is happening in all the countries you have Muslims. There is an interesting fable from the land of the Muslims about the ‘The Arab and the camel’, that is their modus operandi around the world.Advertisement

I will not narrate the fable for the sake of keeping this article short. I recommend a historical book by Murray Gordon called ‘Slavery in the Arab world’ and here are a few links as well …


I could go on but I think you get the picture. Biblically, the Muslims are the sons of Ishmael, the son of Abraham, the half brother of Isaac; the important distinction is that Isaac was a Son of Promise and Ishmael was not. It’s not rocket science to know that this would lead to jealousy, terminal jealousy.
As for Muhammad, the linchpin of their religion, I will not waste time on him, in the Koran every so often you are reminded time after time that non-believers are basically open season (basically you can do whatever you want to them, Allah will not hold you accountable). In addition, they are worse racists than the Whiteman. In the book of Genesis this is said about Ishmael and his offspring;
‘And he will be a wild man; his hand will be against every man, and every man’s hand against him; and he shall dwell in the presence of all his brethren.’
In short, if there is need to do business with these people, meet them at the border and conclude everything there and send them back. Angola has managed to deal with them successfully, it is in our best interest to study how the Angolans have done it and follow suit.
In conclusion my fellow Africans, especially the ministers, please do not sell your people down the river for pieces of silver or greenbacks, or pounds or whatever you want to call them. We are now living in the end times, the days of Noah, look around you, discern the rimes. Is it worth losing your soul for?
I would recommend that the health ministry stops accepting these free vaccines or conditional aid, be careful of these international food donations and, lastly, Muslims should not be allowed to get a foothold in the country for our continued existence; it is that bad.
There is scripture in the bible that says roughly ‘If any man thinks that he knows anything at all … let him know that he knows nothing yet, as he ought to’.