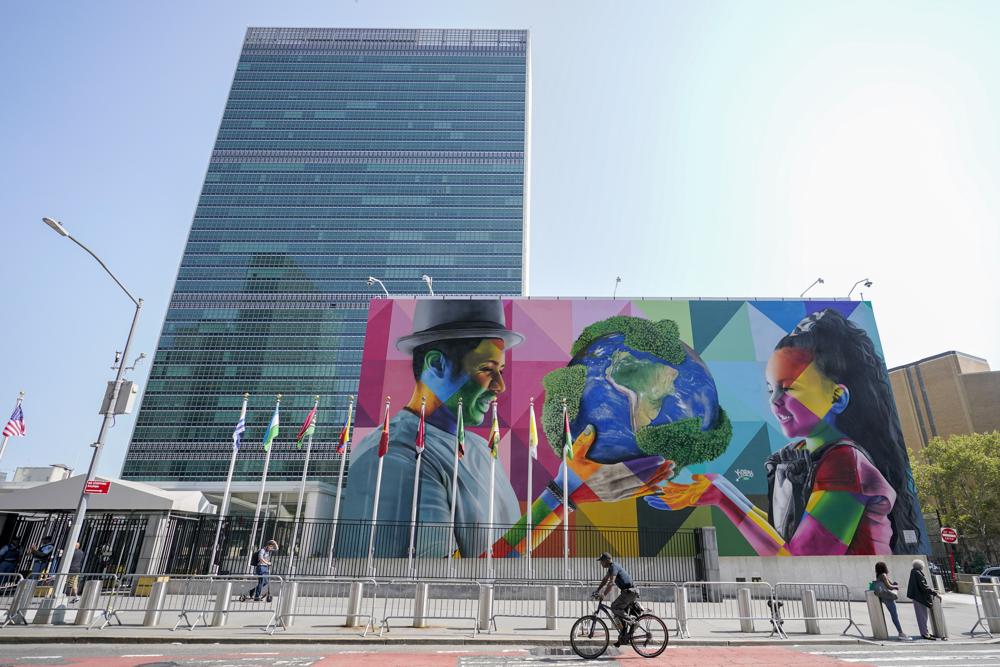 UNITED NATIONS: Facing a complex set of challenges that try humanity as never before, world leaders convene at the United Nations this week under the shadow of Europe’s first major war since World War II — a conflict that has unleashed a global food crisis and divided major powers in a way not seen since the Cold War.

The many facets of the Ukraine war are expected to dominate the annual meeting, which convenes as many countries and peoples confront growing inequality, an escalating climate crisis, the threat of multiple famines and an internet-fueled tide of misinformation and hate speech — all atop a coronavirus pandemic that is halfway through its third year.

For the first time since the United Nations was founded atop the ashes of World War II, European nations are witnessing war in their midst waged by nuclear-armed neighbouring Russia. Its Feb. 24 invasion not only threatens Ukraine’s survival as an independent democratic nation but has leaders in many countries worrying about trying to preserve regional and international peace and prevent a wider war.

U.N. Secretary-General Antonio Guterres said the strategic divides — with the West on one side and Russia and increasingly China on the other — are “paralyzing the global response to the dramatic challenges we face.”

He pointed not only to the devastation in Ukraine from nearly seven months of fighting but the war’s impact on the global economy.

Escalating food and energy prices are hitting the world’s poorest people hardest, and nations are “being devoured by the acids of nationalism and self-interest” instead of working together and resolving disputes peacefully, two principles that lie at the heart of the U.N. Charter and underpin everything the United Nations tries to do.

“The General Assembly is meeting at a time of great peril,” the U.N. chief said last week.

For the first time in three years, leaders will be delivering their speeches in person in the vast General Assembly hall. There will be no more COVID-caused prerecorded addresses or hybrid meetings, with one exception: Ukrainian President Volodymyr Zelenskyy.

Over objections from Russia and a few allies, the 193-member assembly voted overwhelmingly Friday to allow the Ukrainian leader to pre-record his speech because of reasons beyond his control — the “ongoing foreign invasion” and military hostilities that require him to carry out his “national defence and security duties.”

The death of Britain’s Queen Elizabeth II and her funeral in London on Monday, which many world leaders plan to attend, have created last-minute headaches for the high-level meeting. Diplomats and U.N. staff are scrambling to deal with changes in travel plans, the timing of some events and the logistically intricate speaking schedule for world leaders.

Guterres is skipping the funeral to preside over Monday’s “Transforming Education Summit” that he called to create action on a U.N. goal to ensure quality education for all children by 2030 that lost significant ground during the pandemic.

The actual gathering of world leaders, known as the General Debate, begins Tuesday morning with the U.N. chief’s state of the world speech to the 77th session of the General Assembly which began on Sept. 12. Brazil has spoken first for over seven decades because at the early General Assembly sessions it volunteered to speak first when no other country did.

The U.S, president, representing the host country for the United Nations, is traditionally the second speaker. But President Joe Biden is attending the queen’s funeral, and his speech has been delayed until Wednesday morning. Senegalese President Macky Sall is expected to take Biden’s slot.

Nearly 150 presidents, prime ministers and monarchs are on the latest speakers list, a very high number reflecting the importance of the meeting not only for presenting every country’s view of the world but for private one-on-one and group meetings where diplomats say a lot of the world’s business is carried out.

In addition to Zelenskyy, Biden and Brazil’s President Jair Bolsonaro, other heads of state coming to the U.N. include the presidents of Turkey, Iran, France, Colombia, South Korea, South Africa, Egypt and Venezuela. Heads of government on the list include Britain’s new Prime Minister Liz Truss, German Chancellor Olaf Scholz also making a first appearance, and the prime ministers of Japan, Israel, Iraq and Pakistan. Russia and China are sending their foreign ministers.

For many years, foreign ministers of the five veto-wielding permanent members of the U.N. Security Council — the United States, Russia, China, Britain and France — have met on the sidelines for lunch or dinner. Diplomats said no meeting is planned this year.

During typical high-level weeks, thousands of people are in the U.N. complex for speeches and hundreds of side events. But because of the continuing pandemic, this year only the few events organized by the secretary-general and the General Assembly president are being held at U.N. headquarters. Dozens of side events will take place elsewhere in the city.

Richard Gowan, U.N. director of the International Crisis Group, said Ukraine and the food crisis will be the two “overarching themes” and the message from Western leaders is going to be clear: “This is Russia’s war of aggression and this is a huge attack on the U.N. system.”

A highlight will be the U.N. Security Council ministerial meeting on Sept. 22 focusing on the fight against impunity in the war in Ukraine — a topic decided by France which holds the council presidency this month. The meeting could put foreign ministers of the five permanent council nations in the same room with Ukraine’s foreign minister, Dmytro Kuleba, who has been invited.

France’s U.N. ambassador, Nicolas De Riviere, said Friday that “perpetrators will be held accountable” for the “dramatic consequences” that “the Russian war of aggression” has had on civilians in Ukraine. And U.S. Ambassador Linda Thomas-Greenfield said the United Nations faces “a crisis of confidence” brought about by Russia’s invasion of Ukraine that violated its neighbour’s sovereignty and territorial integrity, “trampled on human rights” and struck at the heart of the U.N. Charter by pursuing war instead of a negotiated peace.

She told reporters Friday that the response must be to “double down on our commitment to a peaceful world and hold even closer our deeply-held principles of sovereignty, territorial integrity, peace and security.”

Thomas-Greenfield insisted the high-level meeting “will not be dominated by Ukraine” because there are conflicts taking place elsewhere as well. That’s why she says the United States is focusing on tackling the food crisis as well as climate change, advancing global health and upholding the U.N. Charter.

The Crisis Group’s Gowan said his organization has seen in recent weeks that African and Latin American countries “have gradually succumbed to Ukraine fatigue,” and there is a feeling in many parts of the U.N. “that countries don’t want to have to constantly attack Russia.” There is a clear understanding among Western leaders, and especially in the U.S., of the need “to keep non-Western countries on board over Ukraine,” he said.