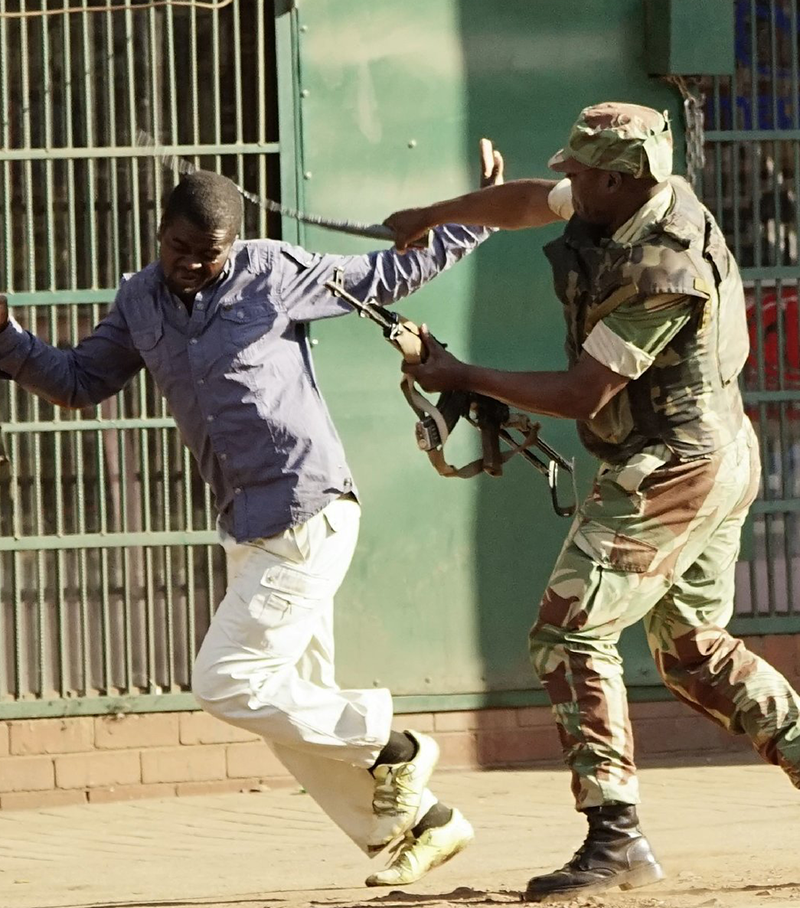 By Jeffrey Moyo for The Globe & Mail

“Just thinking of voting causes me to become more afraid,” Maxwell Tauro told The Globe and Mail. I might be met with bullets. I’m just fearful that I might get shot like my son.”

With a new election just months away, farm labourer Maxwell Tauro is living in fear. Like many Zimbabweans, he was traumatized by the brutal violence of previous elections. His own son was among those who died.

Challenge Tauro, a 20-year-old street vendor who loved gospel music, was hit by a hail of bullets when soldiers fired at protesters after the 2018 election.

Just hours earlier, he had left his village home to sell music and second-hand cellphones on the streets of Harare. “He was not an activist,” his father said. “He loved to sing.”

His neighbours alerted him to social-media photos that showed Challenge lying bloodied on the street. “The next I saw him, he was in hospital, with the left side of his chest ripped open by bullets. He struggled to speak to me even as he recognized me.”

Zimbabwe’s next election is scheduled for the middle of next year, and already there are signs of rising violence from the ruling Zanu PF party, which has dominated the country since its independence from white minority rule in 1980.

Recent opposition meetings have been stormed by pro-government thugs who have assaulted people, smashed car windows and torn down banners. One prominent member of Zanu PF warned the opposition that it could face worse bloodshed next year.

Zimbabweans live in a climate of fear because they know that nobody was prosecuted for previous election violence. The soldiers and police seem to have impunity.

After the deaths of Challenge Tauro and five others in the 2018 crackdown, a commission of inquiry was appointed, led by former South African president Kgalema Motlanthe. It concluded that the deaths and dozens of injuries “arose from the actions of the military and the police” – but nobody was ever arrested or charged.

The inquiry also recommended compensation for the victims or their families. But none was ever paid, and Mr. Tauro – who earns US$50 a month – cannot even afford to build a tombstone for his son.

Zimbabwe has a lengthy history of election violence, and the victims of earlier attacks are still awaiting justice.

Golden Nyazvigo won a local council seat for the opposition Movement for Democratic Change (MDC) in 2008. But as he awaited the voting results in his village in Mashonaland East province, he was grabbed by unknown assailants, apparently from a pro-government militia, who beat him for hours. Then he was taken to Zimbabwe’s feared secret police, the Central Intelligence Organization, where he was beaten again.

After they forced him to write a resignation letter, he fled to Harare and took refuge at MDC headquarters. Days later, as he strolled with a colleague, they were suddenly surrounded by strangers who seized them and took them to a secret torture site.

“We were beaten on our feet until my right leg was broken,” Mr. Nyazvigo said. “I was forced into an unmarked vehicle and dumped at a railway line to create an impression that I had been knocked down by a moving train.”

For the opposition, there was worse to come. The first round of the 2008 election did not produce an outright winner, forcing a runoff. The second round turned violent. More than 200 people were killed. Thousands were assaulted, tortured, raped or abducted.

“I’m now living in fear of every election,” Mr. Nyazvigo said. “Next year, during the elections, I will make sure to leave the country and hide in South Africa. I don’t want trouble any more.”

Issau Nyikadzino, a 75-year-old village leader in Mashonaland East, still suffers back pains from the torture he endured during the 2008 election. He leans on a walking stick, struggling to walk. “I was taken to a farm where I was beaten for 21 days on accusations of being an MDC supporter,” he recalls.

He worries about the looming election. “The people who tortured me in 2008 might come back for me.”

Leticia Makuvaza is another Zimbabwean who narrowly escaped death during election violence. “I heard gunshots while I was leaving my office,” she said, recalling the 2018 protests. “The next thing I knew, I was on the ground, unable to get up, seeing blood oozing from my knees.”

The injuries left her permanently in a wheelchair, which adds to her anxieties about next year’s election.

“If there are gunshots, in my condition I will just be shot and killed because I won’t be able to flee.”

Many analysts say the fears of violence are valid. The opposition party, now called the Citizens Coalition for Change (CCC), remains popular and won a majority of the by-elections this year, posing a serious threat to Zanu PF’s four decades in power. In response, President Emmerson Mnangagwa has been even more repressive than his long-ruling predecessor, Robert Mugabe.

In one incident last month, pro-government thugs attacked a CCC campaign convoy. They slashed the tires of the vehicles and beat the campaigners with sticks, injuring some and forcing others to flee into the bush.

This month, when CCC held a press conference in Harare, dozens of youths from the ruling Zanu PF burst into the room and disrupted the event, tearing down a banner and chasing away the party’s officials, while police watched and ignored the violence.

Owen Ncube, a former security minister in Mnangagwa’s cabinet, told a recent political rally that the 2023 election could be bloodier than the 2008 election.

“If you sell out,” he warned, “we are going to deal with you in a crude way.”