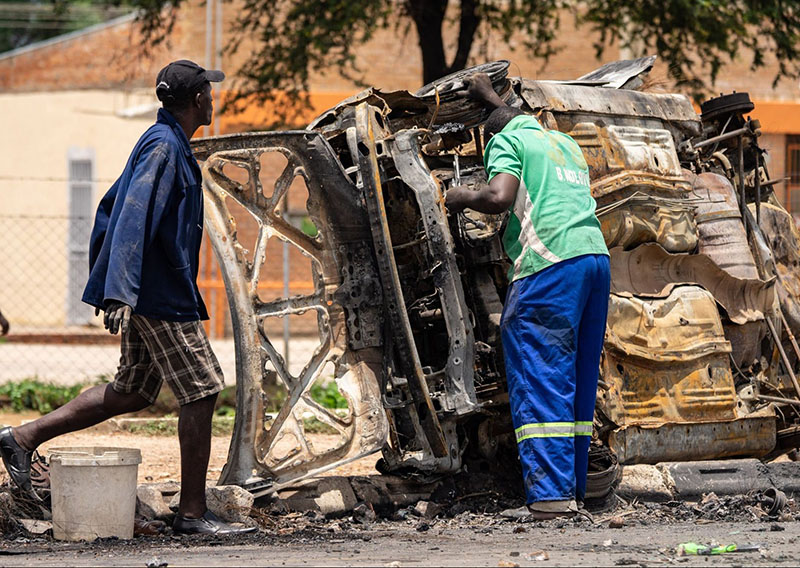 By The Financial Times (UK)

BULAWAYO was once Zimbabwe’s answer to Chicago: an industrial, farming and railway hub. Today its decline, tracking that of the southern African nation, is measured in dormant factories and mothballed cold-storage facilities that shipped meat to Europe in the city’s heyday.

Long sidelined for being an opposition stronghold against the ruling Zanu PF of Robert Mugabe — who was deposed in a coup 14 months ago — decades of economic despair in the country’s second-largest city exploded with unusual fury during nationwide protests in January.

Frustrated citizens were called on to the streets by trade unions after Emmerson Mnangagwa, Mugabe’s former henchman turned successor, announced that petrol and diesel prices would be doubled overnight. This had come in response to a crippling shortage of US dollars that had led to empty fuel stations.

The protests were met with a vicious crackdown by security forces. That cleared the streets but only heightened the discontent under the surface.

His business has struggled because drivers have stayed off the road. Imported South African cans of car polish cost $40 — a reflection of how the currency crisis is driving up prices.

As dollars have disappeared, dubious surrogate “bond notes” have arisen. The government insists they are worth the same but “bond” is valued up to four times less in the black market.

Zimbabwe is open for business, the president says. Now we make a business, and things are expensive, and we get harassment . . . How do I work when the system is broken?” Mr Donald asked.

As Donald spoke, his clients — grim-faced drivers of battered minibus taxis — gathered around. One recounted how soldiers had beaten him for having the temerity to raise his own prices: “They don’t debate. They just command and go.”

In Bulawayo’s working-class western suburbs, smashed shopfronts and mangled safes torn out of thick concrete casings attest to the ferocity of looting unleashed in the protests.

It’s a puzzle. Why loot? It might be understandable because of the level of hardship, all the bottled-up feelings,” said a security guard posted at a burnt-out supermarket.

Some businesses may never recover from the blow.

“This thing happened at a very unfortunate time — the economic situation is very unfriendly,” said Bulisani Tshuma, an owner of several shops in the suburbs who lost $1.3m of goods to the looting. They will cost $1.6m to replace, given the higher fuel prices. Tshuma and other business leaders in Bulawayo have begged for tax relief.

In the 1980s Bulawayo was scarred by killings by security forces that targeted the Ndebele minority and became known as Gukurahundi. The city then suffered as Mugabe’s misrule stripped Zimbabwe of jobs, industry and even a currency after hyperinflation in 2008.

Today some of the city’s poorest residents try to eke out a living selling mouldering fruit or dealing black-market US dollars by the side of potholed boulevards. The violence has convinced the victims of army beatings such as Lovemore, a car mechanic, that the government has no answers to their hardship other than repression.

If things don’t change, I absolutely believe that there is a likelihood of other protests — despite the assaults. People are suffering,” said Lovemore. He declined to give his real name as he lifted his shirt to reveal wounds from a whipping.

The beating seems to have hardened the otherwise shy 23-year-old. Soldiers attacked without warning and stole his phone as he raced to rescue a friend from looting. When Lovemore plucked up the courage to file a report to police, “they said that they wouldn’t touch soldiers”.

Mnangagwa’s promises to bring in international investors are in shreds after the crackdown that led to 12 deaths, hundreds of beatings and forced disappearances. The violent military response has also rumoured to have triggered an abortive bid in the ruling Zanu PF to unseat the former security chief, raising questions over who controlled the state.

The murky infighting signalled a turning point in the currency crisis, which began with de facto printing of digital dollars without physical backing to prop up parlous state finances. Opaque central bank rationing of dollars has throttled business in particular.

Mnangagwa’s order to double the price of fuel was seen as a grudging acknowledgment that the system cannot last; the price increase corresponded to the real exchange rate between dollars and bond notes.

Some businesspeople see this first crack as leading to the floating of a new currency. But others believe an opportunity to rebuild state finances since  Mugabe’s exit has been wasted.

“It might well be that there are reformers, hardliners and anarchists, but the so-called reformers have not been able to, or chosen to, undertake the required reforms in the past 14 months,” said Richard Honey of Msasa Capital, an investment firm.

On Bulawayo’s streets, informal traders pointed to another victim of the collapsing bond notes: the soldiers oppressing them.