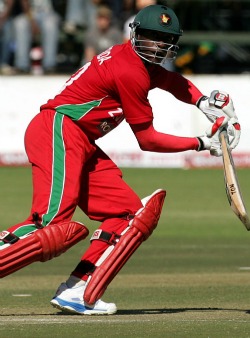 India 294 for 8 (Dhawan 116, Karthik 69) beat Zimbabwe 236 for 9 (Sibanda 55, Utseya 52*, Unadkat 4-41) by 58 runs
INDIAN opener Shikhar Dhawan blasted his third career one-day international century to lay the foundation for his team’s comfortable 58-run win over Zimbabwe in the second game of the five-match series in Harare on Friday.
Dhawan’s 116 off 127 balls enhanced his growing reputation in the limited overs game and, complemented by 69 runs from Dinesh Karthik, helped India compile a formidable total of 294 after being sent in to bat.
Zimbabwe, despite a bright start in their first 20 overs, fell well short in their reply, finishing on 236 for nine and helping India to a 2-0 series lead after their six-wicket victory on Wednesday.
It might have been a much more competitive outing had the home side capitalised on early chances as India’s top order struggled with a lively pitch at the Harare Sports Club.
India lost their first four wickets for only 65 while Dhawan lived a charmed life.
He was caught behind off Kyle Jarvis when he had only three runs but a television review found the bowler had overstepped and was no-balled.
Dhawan was then dropped twice in between some text book-stroke play that saw him reach his half-century in 70 balls and his ton off 115.
Together with Karthik, he hauled India out of trouble with a partnership of 167 in 154 deliveries.
“It was my lucky day, the wicket wasn’t easy but our partnership took us to a big score,” Dhawan said at the post-match presentation when he picked up the man of the match award.
A slow over rate saw Zimbabwe forced to bowl part-time spinner Sean Williams at the death, allowing a lusty late flourish from Vinay Kumar and Mohammed Shami.
Vusi Sibanda helped get Zimbabwe’s chase off to a positive start, scoring 55 at the top of the innings, but they were unable to keep it up, losing momentum as they slumped from 109 for one to 133 for six.
As the run rate began to increase Zimbabwe seemingly settled for batting out the game, ending eight wickets down from their 50 overs, with Prosper Utseya hitting an unbeaten 52.
The two countries meet again in Harare on Sunday in the third match of the series before heading to the southern city of Bulawayo for the last two encounters next week.Advertisement