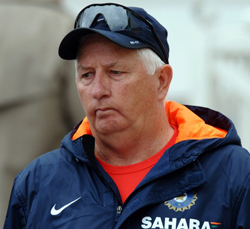 BRENDAN Taylor says he is banking on compatriot Duncan Fletcher to persuade the India cricket board not to pull the plug on a tour of Zimbabwe scheduled for July.
India will play in the Champions Trophy and a tri-series in the West Indies shortly before the scheduled tour of Zimbabwe between June 28 to July 11, and officials say they are concerned about a “fatigue factor”.
But the captain has appealed to Indian coach Fletcher, a Zimbabwean, suggesting taking the Indians to Harare would provide a “happy homecoming” for him.
Fletcher’s fielding coach is Trevor Penny, another Zimbabwean.
“I don’t know whether Fletcher can decide, but he should convince the Indian cricket board to send its team over here. It would be a happy home coming for him,” Taylor said.
“It’s disappointing news that they may not tour. To play against the Indian team is always a big challenge and we would like to accept it.”
Zimbabwe are due to play three ODIs with India, but discussions were underway to increase the Future Tours Programme matches to five.
The India cricket board insists that it will “respect” its commitment to Zimbabwe Cricket (ZC) but the tour may have to be pushed back, although no new dates have been suggested.
An India no-show will have wide-ranging for Zimbabwean cricket, most notably financially. ZC is running on close to empty and is in severe debt. Match fees to some players are still outstanding and there has been no clarity on the scheme for funding franchise cricket next summer.
The cost of hosting Bangladesh in April and early May will not have helped that situation. There are also scheduled tours by Pakistan in August and Sri Lanka in October, for which they will likely make a loss.
Some of the money could have been recovered by the big draw-card of India because of the substantial television rights fees they bring with them. It could also have helped ZC clear some of their outstanding bills.Advertisement