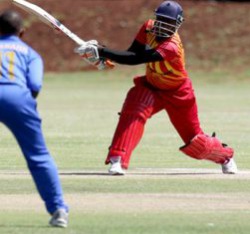 DESPITE resting the newly crowned all-time top One-day International wicket-taker Jhulan Goswami, India women hardly broke into a sweat in Potchefstroom on Friday as they cruised to a comprehensive 9-wicket win against Zimbabwe in the Quadrangular series.
Yet again, handling India’s spin triumvirate proved to be too hard a task for their opponents with left-arm spinner Rajeshwari Gayakwad (3/25) leading the way. She got ample support from spin-partners Deepti Sharma (2/14) and Poonam Yadav (1/9) as the Zimbabweans were shot out for just 93.
Just like India’s previous encounter against South Africa, they lost an early wicket after makeshift opener Veda Krishnamurthy was trapped leg-before by Josephine Nkomo in only the third ball of the chase. However, Harmanpreet Kaur (38 not out) and Mona Meshram’s (46 from 53) breezy 93-run stand from 108 deliveries took India home in only the 19th over.
India had posted big wins against Ireland and South Africa earlier. Their next round-robin fixture is against Ireland on May 15.
Brief score: