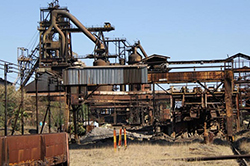 INDIAN mining company, Balasore Alloys, is to acquire troubled Zimbabwe Alloys (ZimAlloys) in a deal worth over $90 million after securing a High Court approval this Monday.
Gweru-based ZimAlloys has been under judicial management since 2014.
The deal, to be handled by the Balasore directly or through its nominees and affiliates, would involve a cash payment of $16, 47 million for acquisition of 70 percent shares from existing shareholders.
A further staggered payment of $74, 26 million will be made to creditors for capital injection and expenditure.
The arrangement was approved by the High Court in Harare this Monday.
“The acquisition of ZAL (ZimAlloys) which operates in a similar business segment in a separate geography will help Balasore Alloys in creating synergies and in expanding its business base to different parts of the world,” Balasore said in a statement Wednesday.
“The scheme is subject to fulfilment of certain conditions precedent contained in the scheme of arrangement. Further the scheme is subject to section 191 of Companies Act of Zimbabwe.”
Balasore Alloys, formerly Ispat Alloys Limited, is part of the renowned Ispat group of companies, a major conglomerate in India.
Promoted by Pramod Mittal, the Indian group’s companies have a presence in several countries.
Zimbabwe is home to the second largest chrome ore reserves in the world.
ZimAlloys holds 19,780 hectares of mining areas in different parts of Zimbabwe, which has proven resources of 72,25 million tonne of chrome ore and its subsidiary, Zimbabwe Alloys Chrome, owns a Ferrochrome plant.
A former subsidiary of Anglo American Corporation, ZimAlloys was sold to local businessmen who included banker Farai Rwodzi and Pacific Cigarettes founder Adam Molai, in 2005.
Not long after the sale, the ferrochrome producer was placed under judicial management in 2014 due to poor performance attributed to the closure of its four furnaces, poor commodity prices and escalating costs.
Presently, the company is only processing chrome from its dumps estimated at four million tonnes in 2015.Advertisement