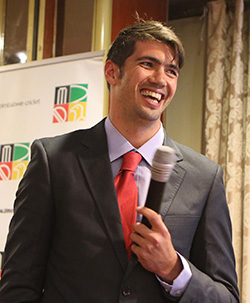 TANGIBLE gains go hand in hand with the intangible ones in every cricket series. There are runs to get, wickets to take and a trophy to win just as there are careers to establish, experiments to conduct and markers to lay for the future. India’s tour of Zimbabwe, for three ODIs and T20Is each, beginning on Saturday is almost entirely about the latter.
The next ICC tournament – the Champions Trophy – is a comfortable 12 months away so the biggest contribution of this series could be in identifying new talent and giving them some exposure.
India’s selectors seem to think so judging by the fact that MS Dhoni is perhaps the only first-choice pick in a 16-member squad, nearly a third of which comprises uncapped players.
Zimbabwe have gone a different route towards the same end. They have assembled 18 members for each format – a huge number considering it is a home series – with 12 players finding a place in both squads.
Considering Zimbabwe’s calendar is often characterised by a paucity of matches, their administration have to make the most of a series against one of the premier teams in international cricket. Picking a roster bursting at the seams, but with the same core of players, is a step in that direction.
India have viewed Zimbabwe tours as proving grounds in the past and it is no different this time with eight of their most recent XI that played in the semi-final of the World T20 nowhere near Harare, which hosts all six matches of this series.
Many in the squad have never played in Zimbabwe before. Yuzvendra Chahal, Faiz Fazal, Mandeep Singh, Karun Nair and Jayant Yadav have not played international cricket before. The clearest measure of the lopsidedness in experience in this touring party is that Dhoni has played more limited-overs matches than the rest of the 15 combined.
Zimbabwe have to deal with an interim captain and coach in Graeme Cremer and Makhaya Ntini after Hamilton Masakadza and Dav Whatmore were sacked mere weeks before this series. And yet, it is quite likely that their XI may not appear as untested as the one Dhoni will be leading.Advertisement

Teams usually assimilate rookies amid a buffer of well-worn hands who can take the pressure off. That way the player can concentrate on his performance rather than worry about the consequences, and the team is also insured against a punt gone wrong. But judging from the make-up of the Indian team, it is hard to shake the perception that they don’t think Zimbabwe will upset them.
Stand-in coach Sanjay Bangar was concerned by alien conditions. Dhoni explained that the tour was about adaptability. But there wasn’t much discussed, at least in public, that barring Tinashe Panyangara, who was advised rest after a recurrence of his lower back injury, Zimbabwe have called up the best players they have.
To be fair, Zimbabwe’s best hasn’t quite cut it in recent results. They were the only Full Member to not qualify for the Super 10s at the World T20. They are ranked below Afghanistan in ODIs and have lost all five T20Is between the two countries. That is a stark reflection of how cricket around the world has surged forward, leaving Zimbabwe behind.
Catching up is going to be hard. India might look raw, but that is no longer a terrible liability in the age of T20 franchise cricket. All of their personnel have played the IPL.
Ambati Rayudu has been a two-time champion. Karun Nair introduced himself with a rash of centuries in first-class cricket but the 24-year old is next-gen authentic considering the skill with which he sweeps and reverse-sweeps. Manish Pandey made his international debut during the previous Zimbabwe tour and, six months later, against Australia in Sydney, enforced his candidacy for a permanent place in the XI.
A profitable series could tip them as the frontrunners for the role Yuvraj Singh performed in the middle order – take control after the Powerplay and then give the innings a good old kick at the end. T20 leagues do not necessarily replicate the intensity of an international game but most of them are comprised of teams who buy their players to win them a trophy, and it is notable that Zimbabwe’s are among the least sought after.
The best way to change that is to start winning and Zimbabwe haven’t done that often enough over the last 12 months. It wasn’t that they didn’t have plans to beat their opposition.
The core of the problem was in how they didn’t have enough players who could execute them – a batsman who can last for as many of the 50 overs as possible, someone who can bat for 30 balls and score 60 runs, a bowler who could take a wicket when it was needed the most. Game-changers.
That’s who Zimbabwe need. India are on the hunt for the same as well. And two weeks from now, there will be some indication of who has done better in this race.

Alagappan Muthu is a sub-editor at ESPNcricinfo.