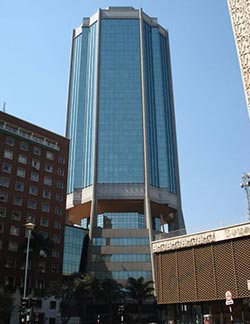 THE Reserve Bank of Zimbabwe (RBZ) must push local banks to reduce the cost of borrowing money, which is stifling local manufacturing industries ability to recapitalise and retool, industrialists have said.
Industry requires over $2 billion in fresh capital to recapitalise and retool following years of economic decline but local banks, which are also struggling to attract offshore funds, are extending loans at between 16 to 30 percent per annum.
Manufacturing is at a third of capacity while companies are having to contend with demands for higher wages from disgruntled employees.
Industrialists said at the Confederation of Zimbabwe Industries (CZI) annual general meeting on Thursday that local banks were over pricing loans, which called for central bank intervention.
“The cost of capital is extremely high and is a major impediment on recapitalisation efforts,” said Dairibord Holdings chief executive, Anthony Mandiwanza.
He said banks were, in spite of the difficulties faced in obtaining credit lines, pricing the loans at a premium while they were failing to mobilise local to deposits.
“A lot of money is in the informal sector, suggesting people are not depositing their money. The reasons are also understandable because there is no interest on deposits,” he said.
Studies estimate that between $3 and $7 billion is circulating outside the formal system.
Former CZI president and Imperial Refrigeration chairman Callisto Jokonya said banks must instead offer interests rates of around eight percent per annum on deposits to encourage locals to bank.
This, he said, would help mobilise deposits which would in turn be extended as cheaper loans to borrowers.
“This therefore becomes an intervention issue for the central bank,” he said.
Nestle Zimbabwe chief executive Kumbirai Katsande said authorities must stop blame shifting to get the economy ticking.
But RBZ senior division chief Simon Nyarota said the central bank could not dictate to banks.
“As a central bank, we are trying to avoid control. If we control them they will find other means to circumvent that (control), is why we are using moral suasion” he said.Advertisement