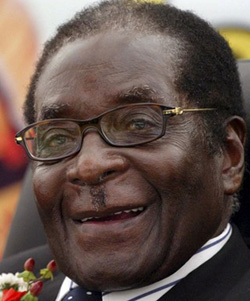 BITTER infighting within the opposition risks fatally weakening President Robert Mugabe’s political foes just as the sun has begun to set on his 33-year rule.
A lasting rift within the country’s battle-scarred Movement for Democratic Change (MDC) now seems inevitable.
Within a few rough days, a party faction headed by long-time leader Morgan Tsvangirai’s erstwhile deputy Tendai Biti suspended him, and the veteran trade union leader promptly responded by expelling all involved in the move to cast him aside.
For 62-year-old Tsvangirai, who has led the party through intimidation and innumerable beatings and arrests since its founding 15 years ago, it was an unforgivable act of political fratricide.
He described the attempted party coup – which took place when both he and his deputy Thokozani Khupe were absent – as “illegal, unconstitutional, illegitimate and bogus”.
The clash with Biti was a long time in the making, but the timing could hardly be worse.
Since 1999, Tsvangirai has lost three successive elections to Mugabe, whose hand rested firmly on the electoral scales each time.
The elderly leader was returned to power at the polls last year, but he is now 90.
Tsvangirai’s supporters largely forgave him for the electoral defeats, but his detractors became foes when he led the MDC into a negotiated unity government with Mugabe, serving as prime minister from 2009 to 2013.
While the forced marriage helped pull Zimbabwe’s crumbling economy out of free fall, prevented bloodshed and ushered in a new constitution that limits executive power, it was a political disaster for the MDC.
Mugabe, a consummate strategist, managed to reap the rewards of better government and a healthier economy while making Tsvangirai look marginal and even slightly comic.
Brewing storm
After last year’s election, Biti, the MDC’s secretary general and a leading light of the party, led a group that privately pressed Tsvangirai to step down without success.
Biti and his supporters have long believed that the MDC must take a more robust approach to opposing Mugabe and his powerful Zanu PF party.