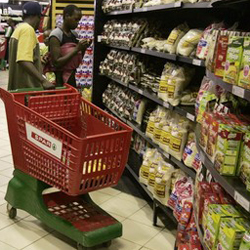 ZIMBABWE’S annual inflation for September eased marginally 1,28 percent in August to 0,86 percent the Zimbabwe National Statistics Agency (Zimstats) has said.
Month-on-month food and non-alcoholic beverages inflation stood at -0,18 percent gaining 0,72 percentage points from -0,9 percent. Non-food inflation stood at 0,17 percent shedding 0,06 percentage points from 0,23 percent in August.
The CPI for September stood at 100,33 compared to 100,28 in August and 99,48 in September last year.
According to figures from Zimstat year-on-year food inflation stood at – 0,32 percent whilst non-food was at 1,45 percent.
Economic analysts say the direction of inflation decline was sustainable and should continue to trend downwards during the last quarter of the year.
However, the analysts said the current figure was no longer a true reflection of inflation fundamentals with the Consumer Price Index (CPI) weightings said to be no longer consistent with current consumer spending patterns.
They said real inflation was somewhat higher than is presently being recorded as consumers are spending relatively more on things like food, transport, accommodation, communication, education and health.
Increasing expenditure on strict basics is leaving families with very little to go towards clothing and footwear, which are presently being accorded relatively higher weightings than they should have in the CPI.
There has been little upward movement on prices of clothing and footwear as well as recreation and culture.
The decline in the rate of inflation, albeit that such decline is minimal in extent, has been primarily due to increased competition of imported products such as clothing.
Inflation will most likely remain under control this year with underlying core inflation rates projected to trend sideways or down throughout most of 2013.Advertisement