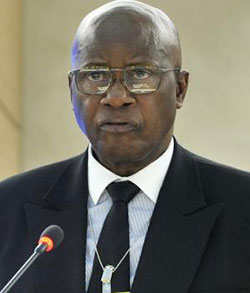 FINANCE Minister Patrick Chinamasa has denied claims soaring prices of basic commodities could propel the inflation higher, insisting Zimbabwe would end the year at a manageable 3 percent and below.
The minister said this in parliament this past week as under-fire central bank governor John Mangudya also moved to distance the premier bank from any indirect culpability in the price hikes.
Fears begin to increase the volatile economy could soon implode under an unsteady pricing regime which has seen commodities priced differently depending on whether one was paying in cash or through electronic cash transfers.
This has further been evidenced through panic buying among locals throughout the week after retailers abruptly increased prices of basic commodities.
Legislators Wednesday demanded answers from the Treasury boss on why the economy was beginning to show signs of distress as evidenced by sudden prices increases.
One of them was Zanu PF Zvishavane-Ngezi MP, John Holder who said prices of basic commodities were going up “at a very high rate”.
“If we look at sugar, rice, flour and green soap, the price for rice has increased from $1.80 to $2.63, flour from $1.71 to $2.10, brown sugar from $1.85 to $1.95.
“What policy has Government put in place to control inflation since we see this happening nowadays,” Holder said.
But a cornered Chinamasa, apparently desperate for time to think over the mess, refused to commit himself to an immediate response preferring to address the matter in a ministerial statement he promised to deliver this week.
However, that was not before he told MPs that government was keeping the country’s inflation well under check.
“I think the question will be dealt with more comprehensively under my Ministerial Statement because it covers very much the issues of inflation.
“However, I must say that as at end of August this year, inflation is at 0.14% and we anticipate that maybe by the end of the year, it will be around 2 to 3%, which still remains the lowest inflation within the SADC region,” Chinamasa said.
The country’s economy took a big knock for the first time since the central bank 2016 went against strong public sentiment to introduce bond notes on a promise it would trade at par with the United States dollar, the country’s de-facto currency since 2009.Advertisement

There were reports the sudden price hike was triggered by a clandestine decision by the central bank to mint and further release loads of bond notes into a forex rich black market to mop up scarce foreign currency.
This forced a tumble in the value of the bond note and a knock on effect on prices.
But Mangudya said in a central bank statement weekend, claims of looming scarcity in basic commodities and the printing of more bond notes was false and intended to cause “panic and despondency” into the economy.
“The Bank also wishes to advise that neither it nor the Ministry of Finance and Economic Development did not and will not print bond notes to buy U.S dollars from the streets as suggested in social media and other reports.
“Such malicious statements are counterproductive and are meant to sabotage the economy that is on the rebound on account of the good agricultural outturn, strong performance of the mining sector and the recovery of the manufacturing sector,” he said.