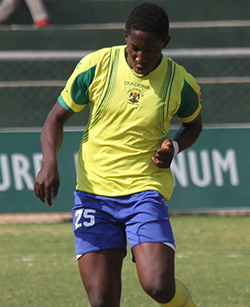 HARARE City’s striker, Francesco Zekumbawire, says he has recovered and is ready for Sunday’s crunch derby showdown against his former employers in the capital.
The former Dynamos striker has seen little game time as he was ravaged by injuries at the start of the season but says he has his confidence back ahead of the clash against defending champions Dynamos at Rufaro.
Zekumbawire is now on the books of Harare City and scored a brace in a 4-1 rout of ZPC Kariba in the Chibuku Super Cup semi-final at Mandava at the weekend.
He hopes for a good outing against his former team.
“I don’t have a point to prove to anyone. I take each game as it comes,” he said.
“I don’t take personal glory what is important is the team winning. Confidence is high. There is no pressure, I am coming from injuries and slowly getting my fitness back, am slowly moving up so I am happy.
“It was good form on the particular game (against ZPC Kariba). Like any other striker, when you go into a game you want to score but sometimes it might not go your way.
“But you can always score, so I will go into the game against Dynamos and try do my best.”
Tough opponents
Dynamos coach Tonderai Ndiraya admitted during a press conference in Harare on Thursday that they were facing difficult opponents.
“We have done our preparations getting into the final but our focus has shifted to the match against Harare City. We are working hard, we are quite focused, quite relaxed,” said Ndiraya.
“Hopefully the boys will give it their best on Sunday. It’s not going to be an easy match; like I said, Harare City are quite a formidable side.
“They are quite strong in all departments if I can put it that way.”
He added: “They have shown what they can do offensively.
“They have scored quite a number of goals in recent game and we are quite aware of that and we are planning accordingly.
“We have to be as tight as possible to stop their marauding strikers but we are equally good we have a very potent strike force.
“The midfield is also good and our defence has been the best, if I can put it that way and the last time we conceded a lot of goals was against FC Platinum at Mandava.”
Harare City will however, have to cope without the injured pair of Talent Chawapiwa and Learnmore Muyambo who are still nursing injuries.Advertisement

But the Sunshine City Boys will have captain, David Kutyauripo, available for selection, having missed a couple of matches because of injury.
In the first meeting the two sides shared the spoils in a 0-0 draw.
WEEKEND FIXTURES
Saturday: How Mine vs Chicken Inn (Luveve), ZPC Kariba vs Caps United (Nyamhunga), FC Platinum vs Whawha (Mandava), Buffaloes vs Tsholotsho
Sunday: Dynamos vs Harare City (Rufaro), Highlanders vs Dongo Sawmill (Barbourfields), Triangle vs Flame Lily (Gibbo), Hwange vs Chapungu