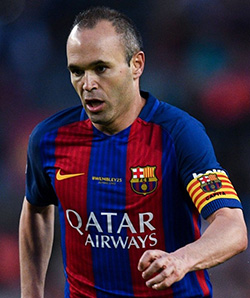 CAPTAIN Andres Iniesta became the first player to sign a contract for life with Barcelona on Friday, ending speculation he could leave the club where he has spent his entire career.
Iniesta, 33, has been at Barcelona since he was 12 years old, making his professional debut in 2002. He is the club’s second all-time leading appearance maker behind Xavi Hernandez, playing 633 games and scoring 54 goals.
He is also the club’s most decorated player alongside Lionel Messi, having won 30 trophies.
“Today is a very special day for me, one of many here for the simple fact I’m continuing at this place which is my home, which means I can continue to aspire to win things for this club, my club,” Iniesta told a news conference.
“This is the club where I grew up and evolved and I feel privileged to be its captain.”
The deal, which has no expiry date, allows Iniesta to decide of his own accord when he will stop playing for Barca and gives him the opportunity to remain with the club in another capacity when he decides to hang up his boots.
“After 118 years of history this is the first time the club has given someone a contract for life, this is an exceptional contract for an exceptional player,” Barca president Josep Maria Bartomeu said.
“Andres has been part of this club since 2002 and won so many things. This golden era needs to continue and that’s why we’ve signed this deal. This is a deal that will delight all Barca fans and will be a reference for future players. We’ve always said: look up to Andres, not just his talent or style of play but his way of being.”
The Spain midfielder’s previous contract with Barca was set to expire in June 2018 and he set alarm bells ringing at the club by declaring in an interview with Spanish newspaper El Pais in August that he could leave when his deal ran out.
“Everyone can understand that someone who is 33 might start to consider things but I never thought ‘I’m leaving’, it was more a question of weighing things up,” Iniesta said when asked why agreeing a new contract had taken so long.
“This is an indescribable sensation, to come here as a 12-year-old and still be here at 33 and to think back on everything that has happened gives me goosebumps all over my body,” he added.
“I have so much sentiment and love for this club, this is my home, the best place I could hope to be at.”Advertisement