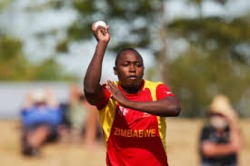 ZIMBABWE fast bowler Tendai Chatara has been ruled out of cricket for nearly six months, after fracturing his left leg. Chatara, 24, sustained the injury last week while playing soccer to keep fit during the domestic off-season.
Chatara had collided with one of the goalkeepers, and though a specialist recommended that there was no need for surgery, an X-ray confirmed the player suffered an oblique fracture of the tibia (shin bone) and a transverse fracture of the fibula (calf bone).
“I discussed with the specialist the available options,” Anesu Mupotaringa, Zimbabwe’s physiotherapists, said. “He advised conservative management, saying that compared to an operation, that treatment will have fewer side effects which will enable the player to have fewer problems when he starts practice and playing again. We also have a diet plan in place which is high in calcium to promote quick healing and strong bones.”
Chatara will be in a full cast immobilisation for four weeks, and a below-knee cast immobilisation for six weeks, depending on the X-ray results after the first four weeks. A programme is also being set up for him to continue working on his upper body and core while his leg heals.
Chatara played all six of Zimbabwe’s matches in the World Cup, emerging as their highest wicket-taker with 10 scalps at an average of 34.20.Advertisement