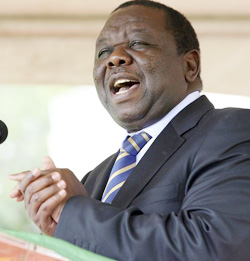 IN 2008, Zimbabwe almost elected a president largely because he gave people hope and he didn’t fit the mold of traditional politics for he was promising change. He gave rousing, yet vacuous speeches to huge adoring crowds. He was supposed to be able to transcend divisions and had pundits slathering him with effusive praise because he was different- he was bold, brash and arrogantly confident. He subsequently LOST the 2013 election.
This man is Dr Morgan Richard Tsvangirai and his party is the MDC-T. He is unlikely to win 2018 elections despite that good showing. The party’s greatest undoing is the tendency to innovate around the familiar. It isn’t a prerogative to lead by virtue of having the superior arguments, policies or ideology. It’s simply moral but not a game changer. It isn’t a push to institute more free market reforms, lower taxes or smaller government. Unfortunately, it isn’t even about increasing the amount of liberty Zimbabweans should enjoy. It isn’t about making us a great prosperous nation.
There was nothing spectacularly superior about Zanu PFs “Indigenize, Empower, Develop and Create Employment” manifesto that made MDC-Ts JUICE inferior. Strategic intentions like JUICE, BUILD and HOPE are great but they are not game changers. Continuos innovation around the blue prints will not make the opposition win elections.The expectation that people will remember and vote based on a blue print is misplaced. It should now be clear to the opposition that the ruling party has never won elections on the strategic intention arena. It’s therefore not wise to continue pivoting political success on these blue prints but rather enter the arena that makes Zanu PF successful in winning elections since 1980.
There is no argument that its feeling that actually win elections. Morgan Tsvangirai almost won two presidential elections based on little more than waves of emotions caused by extreme poverty, hyperinflation and unemployment. The emotions were brewed to toxic levels as a result of the opposition’s complicity in bringing to Zimbabwe “restrictive measures” or sanctions.
The MDC-T was just a “feel good” alternative such that people even had reason to ignore the party’s apparent ambiguous morality, ideological androgyny and principles. The emotions of 2008 have now been exhausted. Restrictive measures and other immense economic challenges are now an almost acceptable way of life. The opposition is failing to manufacture a new set of emotions harsh enough to change the political landscape.Advertisement

The “Mugabe must go” mantra is also now an exhausted and tiring message which completed its marathon just after 2008. It is no longer of strategic advantage to regurgitate the credo. It no longer has gravitas to win elections as shown in 2013. There is need to mold alternative, more engaging and disruptive messages beyond the now tiring anti-Mugabe tirades.
Most opposition players including, but not limited to, MDC, MDC-T, Peoples Democratic Party launches, People First and Renewal Democrats of Zimbabwe all seem to continue communicating this stale Mugabe message. The message is no longer a game-changer. There is need for a new message.
The TV and radio media is broken for the opposition. The print media in Zimbabwe is losing its voice too. Innovating for reach using print, radio and TV media is no longer a viable strategic option; it is innovating around the familiar. There should rather be positive idea diffusion on myriad digital and social media platforms.
The opposition however has no new disruptive messages to drive and retain traffic to the social and digital platforms. Having a website, Facebook and Twitter account is not equivalent to a social and digital media strategy. There seems to be a failure to generate wild-fire-like conversations on digital and social media platforms in the face of a broken TV, Radio and print media complex.
The opposition is an architect of present challenges of apathy and inability to attract first time voters, youth and women. For what seems to be innumerable election cycles, the most common complaint from the opposition is rigging, violence, intimidation, abuse of traditional leaders and rules tilted in favour of the ruling party. Even if this be true it creates apathy as voters now believe the outcomes are predetermined and that voting changes nothing. This message is likely to repeated ad nauseum till 2018.
Without strategic innovation of a new message to fend off apathy, the 2018 elections are tilted in favour of the ruling party. In addition the GNU heavily compromised the opposition as it somehow made the majority resign to the fate that irrespective of election results the opposition won’t be allowed to rule. Without creating a robust message to fend off apathy and a strategy to enter the ruling party arena that wins them elections then the opposition has lost the fight well before 2018.
The fact that for MDC-T and MDC their best foot forward remains Tsvangirai and Ncube respectively is akin to innovating around the familiar. These political parties evolve around and cannot be differentiated from their leaders. These leaders unfortunately have a “loser” tag on them which militates against future election success. Without building their parties into political institutions through investing in succession planning, constant leadership renewal, term limits and robust constitutions, there is likely to be no new ideas that can possibly be infused by 2018. The opposition innovation funnel is crippled by the over-stay of their leaders.
There is talk of a likely coalition with People First. The old saying is that if you don’t stand for something, you can be fooled by anything. This current wave of Mujuru’s contemporary populism seems to be more of an exercise in the old elementary “Mugabe must go” mantra than anything truly substantive. In as much as Mujuru has positive brand equity, a coalition with her party will be evidence of ambiguous ideological androgyny.
In addition, some of her party functionaries like Sibanda and Mutasa are soiled brands due to a history of violence. The design of an election message will be complicated and a hard sell. It’s not going to be easy to sell Jabulani and Mutasa. Without a new way, election success pivoted around the present leaders will split votes.
There will be no reforms being demanded by opposition by 2018. Boycotting elections will be a futile exercise as Transform Zimbabwe, National Constitutional Assembly (NCA) and few other fringe parties have shown appetite to contest for political space. Strategy design to gain political space should be alive to this and time is not on opposition’s side.
Financial resources will also be an albatross around the neck of opposition due to donor fatigue and dwindling disposable incomes. There seems to be no investment in designing new financing models beyond membership cards that have no utility and ecocash accounts that are largely ignored. Without new talent in resource mobilisation across myriad platforms there is no likely success against a well-resourced ruling party. Innovating for success around the familiar will be a great undoing to the opposition.
Brian Sedze is the Chairman of Africa Innovation Hub and a visiting research associate at UR. He can be contacted on brian.sedze@gmail.com