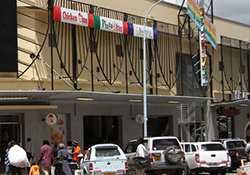 INNSCOR Africa reported a 54 percent surge in revenue to become the first Zimbabwean business to record $1 billion turnover, but the conglomerate’s management was left unimpressed after disappointing trading performances in some key units during the full year to June 2014.
Innscor’s bakeries and fast food units, distribution and SPAR retail business recorded declines in revenue, which were offset by the consolidation of grain and stockfeed processor National Foods (38 percent owned) as well as the country’s leading chicken producer Irvine’s (49 percent owned) for the first time in the group’s results.
This move, a result of changes in accounting treatment, has resulted in a fair value gain of $39 million.
During the year under review, the Group recorded revenue of $1.01 billion, an operating profit of $80.56 million versus $67,4 million previously and an after-tax profit of $78,8 million (versus $48,6 million in 2013).
However, Innscor’s headline earnings, which strip away the fair value gain, were 4,11 cents in FY2014, down 35 percent from 6,36 cents the previous year.
Bakeries and the fast foods subsidiary recorded a three percent decline in revenue to $261 million as demand for bread declined by 10 percent with 115 million loaves sold, compared to 128 million last year.
The distribution business also recorded a one percent decline in revenue to $92 million while Spar recorded a $4,9 million operating loss during the period under review.
However, National Foods recorded an eight percent volume growth, Colcom 16 percent while Irvine’s registered marginal growth across its three core products – frozen chicken, day-old chicks and table eggs – as demand weakened considerably in the second half of the year.
The milling and protein business recorded a nine percent revenue growth to $421 million. Colcom slaughtered 90,667 pigs compared to 87,116 during the comparative period. Irvine’s saw a four percent growth in chickens sold to 13,170 tonnes while National Foods increased it production to 537,736 tonnes from 500,090.
“These are not a great set of results,” Innscor chief executive John Koumides told analysts on Wednesday.
“After a number of years of good growth and profitability, 2014 has proved particularly difficult,” he added, citing a change in environment, lack of disposable income among customers and competition as some of the challenges facing the group.Advertisement

The group incorporated National Foods and Irvine’s into its financials.
Koumides said the company was implementing strategies to return to profitability from 2015.
“We have to make clear cut decisions and some have already been made,” he said.
The group has since closed its Spar Borrowdale branch and is planning to reduce costs through restructuring stores and reduction of capital expenditure.
At its bakeries, Koumides said cost cutting measures such as restructuring the management team had been implemented as well as combining the pie and bread distribution.
Without elaborating, Koumides said the company had come up with various strategies to stimulate growth.
“We are currently at the final stages of reflection and reviewing where we play – the sector, country and target market,” he said.