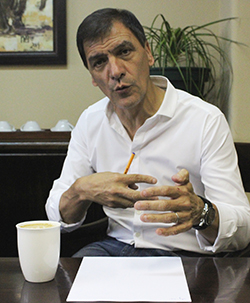 INNSCOR Africa limited has announced plans to re-enter the Nigerian market and expand its logistics and distribution unit as the conglomerate seeks to minimize its portfolio risk, chief executive officer Toni Fourie has said.
With the Zimbabwe business accounting for 88 percent of revenue, the group says it plans to grow its footprint in the region and spread risk at a time aggregate demand has been weakening in Zimbabwe.
The group, Zimbabwe’s largest company by revenue, also seeks to achieve rapid but sustainable profit through organic and acquisitive growth.
Last year, Innscor Africa reported a 54 percent surge in revenue to become the first Zimbabwean business to record $1 billion turnover, but the conglomerate’s management was left unimpressed after disappointing trading performances in some key units during the full year to June 2014.
“We want to minimize our portfolio risk by expanding geographically outside of Zimbabwe so that we can have a far greater portion of our revenue coming from outside the borders, which means possibly a little bit more through durable logistics and distribution rather than fast moving consumer goods dominance,” Fourie told investors on Thursday.
Fourie said Innscor had secured a new strategic partner in Nigeria barely a year after it wound up its quick service restaurant business in the country due to poor returns.
“We have just found a partner and we have signed the partnership agreement. It wasn’t the feasibility studies that mattered initially, it was the quality of the partner,” he said.
“Last time we didn’t do enough work. First of all we structured the partnership incorrectly and secondly we didn’t do enough work on the due diligence of the partner.
“So it’s not so much of the market and being on the ground and finding the right locations.”
Going forward, Fourie said Innscor has plans to restructure its business and improve operating efficiencies.Advertisement