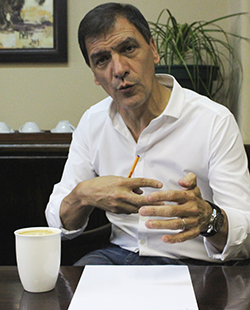 THE country’s largest conglomerate by revenue Innscor Africa Limited on Thursday reported a nearly seven percent decline in revenue to $814 million as key units performed poorly, leading to management overhauls in some.
The group last year became the first local business to record $1 billion turnover, but the conglomerate suffered disappointing trading performances in some key units during the year, and hopes management changes will breathe new life into the subsidiaries.
Presenting the company’s full year results on Thursday, chief executive Antonio Fourie said the group had made management changes in five of its businesses which were facing challenges.
The South African former Ellerine Holdings group chief executive himself took over from John Koumides in October last year to provide fresh impetus to the stuttering conglomerate.
Koumides was reassigned to serve as head of corporate finance and Innscor International.
“We have a number of management changes, in all the businesses that we had challenges, the managing director has been replaced.
“We have new people in place we believe will be able to do the job,” he said.
SPAR Zambia, SPAR Zimbabwe, Colcom, and Bakers Inn are some of the businesses that have new management.
Profit after tax fell 53 percent to $36,1 million.
The group’s light manufacturing unit – which includes National Foods, Colcom, Irvines, Capri and bakeries — contributed 58 percent to total revenue while the logistics arm and Quick Service Restaurants contributed 12 and 16 percent respectively. Retail and wholesale contributed 17 percent.
“The bulk of the business did reasonably well and are showing growth and improvement.
“Two business units – National Foods and bakeries had a really bad year. Also a once-off legacy cost took a toll on the business,” Fourie said.
Innscor had once-off charges amounting to $8,8 million relating to the restructuring exercise, cost of sales and asset impairment.
National Foods Limited registered a 12 percent decline in average selling price and an eight percent fall in volumes.
The country’s worsening economy has eroded consumer spending and the group says it will continue to pursue strategic acquisitions and reduce costs to achieve a targeted return on equity — which Fourie told The Source in a December 3, 2014 interview is 30 percent.Advertisement

The group also targeted 60 percent of free cash generation EBITDA (earnings before interest, taxes, depreciation, and amortization), he said then.