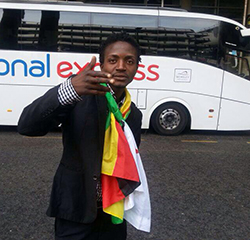 HARARE: Being nominated for three coveted awards and losing out on all of them when he dominated the showbiz scene in 2015 should normally be a disappointment for Killer T but the Mbare-based Zimdancehall singer is taking the setback in his stride.
Killer T, born Kelvin Kusikwenyu, stormed the Zimbabwe showbiz scene with his Ngoma Ndaimba album for 2015. It dominated all the chats while hit songs such as Itai Ndione and Tavekuda Kumbofarawo immediately became favourites and club bangers.
The album also carried other songs such as Maisafanira Kundirega and Kukosha Kwechikorobho that speak to the counscious self. The album was well accepted, with the elderly in society also singling him out among a plethora of other Zimdancehall artists such as Winky D, Jah Luv and She Calaz.
Killer T had also been consistent with his work ahead of the 2015 album, releasing songs such as Ushamwari weNhema in December 2014 and a host of others in early 2015. He travelled across the country, holding shows in Victoria Falls, Bulawayo, Bindura, Marondera, Masvingo, Beitbridge and Mutare among other areas.
“He did all that an artist can do and he deserved to win at least one award.
“He was overtaken by Winky D’s song Disappear at the last minute but, overally, 2015 was his year,” said Nesbert Nyatsambo, who attended the Nama awards ceremony at 7 Arts Theatre in Avondale on Saturday.
Killer T- Takumbofarawo