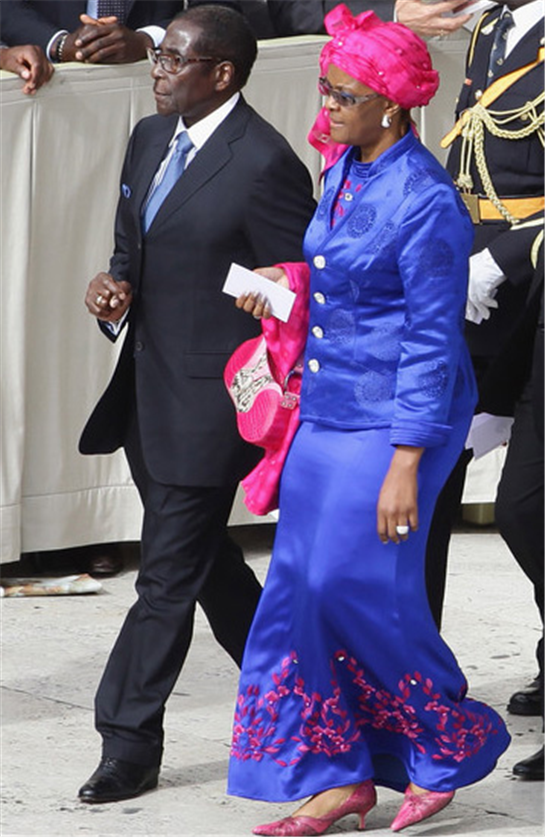 Mugabe and his wife Grace are afraid people. Terrified. They have created enemies in the dark and in the light, powerful enemies. It is no accident that of late Mugabe is increasingly talking about Muammar Gaddaffy.
Mugabe knows that some of his potential successors might reach clandestine pacts with the West for a post-Mugabe regime that will turn around and make lunch of him and his family.
AN observant student of power and its effects, the late French philosopher Michel Foucault noted that “we are subjected to the production of truth through power” and that “we cannot exercise power except through the production of truth.” My interest in this pregnant foucauldian observation is in the loaded term of: The production of truth. All systems of power in the world invent myths and fictions of themselves that they erect and circulate as the truth. This invention and distribution of the truth is so much so that in politics there is no longer anything that can be called the truth but many regimes of truth that are received from the powerful and consumed (or resisted as lies) by the powerless as the truth. The incest between power and its invented truths is so criminal and so vivid that it has become a god unto itself. There is no regime of power without its truths.
By speaking his own truth to power, that he will not accept “boardroom and bedroom coups”, Jabulani Sibanda has soon learnt that after all he is not a war veteran and that he is not brave but he is a suicidal cadre who has gotten into the menu of those who only yesterday valorized him. By expressing ambition for power, Joice Mujuru has fast learnt that in truth she is not Teurai Ropa, and not a decorated war veteran but a corrupt pretender to the throne. What those who are interested can observe here is that as much as the truth can take away power, power can also take away the truth. Many in Zanu PF and in Zimbabwe at large are getting fast used to the manufactured truth that Mugabe is Zanu PF and that Zanu PF is Mugabe and that Grace Mugabe is now in charge of the party, and sorry, the country as well. Whatever other truths and wisdoms are circulating and being consumed out there are only peripheral, the truth that is ruling now and that is in intercourse with power in Zimbabwe is that the Mugabe family is, for now, in charge.Advertisement

I propose that we address hunger and fear that are the real motives of this anger and the brewing war that I described above. Individuals and parties have for a long time, because of pride and fear not spoken about their hunger, and continued to disguise it as anger.  To begin with, people like Emmerson Munangagwa, Dumiso Dabengwa, Sydney Sekeramayi, Joice Mujuru, Jonathan Moyo, Simba Makoni, Ibbo Mandaza and many other players in the dark and in the light, collectively, should by now have swallowed their pride and presented to Robert Mugabe and his family their plan for him and his family after living office, and allayed his genuine fears. To this, Mugabe would make his own recommendations as a living ancestor of the country. African statesmen such as Joaquim Chissano, Thabo Mbeki and the peaceable Kenneth Kaunda would facilitate such an important process. What has led to Mugabe’s fear and the fear of his family is the pretence that nothing is happening and that no one wants his post and that no one is planning anything. Mugabe has had to rely on the CIO for reports about who is planning what about his departure or death.
After Mugabe’s fears have been addressed and he has been given a clear vision of his future of safety, peace, security and that his advice would be sought on everything the party does, and that cadres would rather die than see any imperialists near him or near the country, he can then graduate to his new and higher position as a founding father of the revolution. This political homework has not been done, hence the fear and anger.
Thabo Mbeki became an enemy of war types such as Chris Hani and a few others for understanding it in advance that the anger of the Boer was actually fear buried behind pride. The Boer needed to be told that he was not going to be crucified but accommodated as a citizen. The reason why the Boers today love the name of Mandela more than some black people do is exactly that he made real his promise of guaranteeing their safety in a new South Africa. My intervention is that all this noise that is threatening to drag Zimbabwe into a civil war emanates from the fear and genuine concern of the Mugabes that they are about to be sacrificed and handed over by an ungrateful successor to the cruel hands of their enemies. The young and ambitious in Zanu PF should engage their thinking gear and address Mugabe’s ego, anger and fear. In reality, this is the time for all Zimbabweans to reckon with the Mugabe factor.
After the Mugabe factor has been dealt with, the reformed Zanu PF can lay out its power-sharing plan supervised by a retired and happy Mugabe. On the other hand, the renewalists and other activists in the opposition can prepare to contest the reformed Zanu PF in a climate free of the war and violence of old. Zimbabwe still does have a chance to experience reformed politics inaugurated by reformed politicians who can then approach the larger world and help re-admit a proud Zimbabwe into the comity of world nations.
I call this possibility a Decolonial Political Pentecost because it does not propose to change anyone’s thinking or political party, but it proposes that we change our minds from war to life, and realise that we are all afraid and our fears need to be allayed. In a Decolonial Political Pentecost we can retain our political identities and beliefs, but abandon the politics of war and embrace what Argentinean philosopher, Enrique Dussel has called a “will to life” and practice of “obediential politics” that is preservative of life and guarantees a collective future for all. This decolonial option takes brave and intelligent operatives like Thabo Mbeki, who stood up at a conference in June 1987 in Dakar and told some sad and angry Afrikaners and Africans that “I am an Afrikaner!” It was the time to polish the Boer ego and allay his fears and manufacture an alternative future. We all know the truth, and that there are many truths out there, but the right truth must be said at the right time for progress to be made, and at this time, Zimbabwe needs a certain truth.
Dinizulu Mbikokayise Macaphulana is a Pretoria based Political Scientist and Semiotician: dinizulumacaphulana@yahoo.com