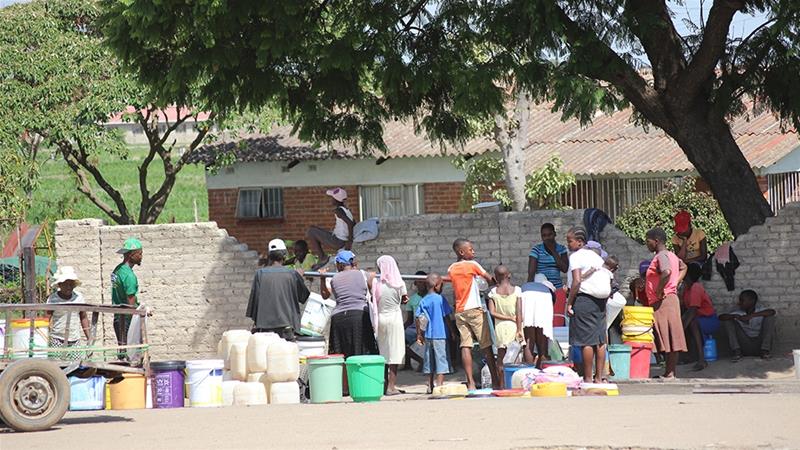 In Zimbabwe, the task of gathering enough clean water to drink, cook and wash is consuming many people's lives, with women and children bearing the brunt of the shortage
Spread This News

Chitungwiza: Ten people push down on a metal pump, drawing up groundwater from a crudely dug borehole in Chitungwiza, about 30km southeast of the heart of Zimbabwe’s capital Harare.

The water pours into a plastic bucket and another empty container rotates in, fed by a queue of more than three dozen people waiting their turn to collect the life-sustaining liquid.

Among those waiting is 34-year-old mother of two Florence Kaseke.

“I woke up at 4am this morning and joined the queue to get water,” she tells Al Jazeera.

“I then went home around 6am to prepare for my children so they could go to school. And I came back here at 8am to check how the queue was doing and then went home again for an hour or so,” she says.

Kaseke reckons she’ll get water by 9pm, but people have been known to spend all night waiting their turn.
Her experience is not uncommon in Zimbabwe, where the task of gathering water has completely consumed many people’s lives.

“Most of the time, we are here at the boreholes,” 75-year-old Sarah Zanga tells Al Jazeera. “I am too old for this.”

Water is essential to life, but in Zimbabwe, access to it has grown precarious. The Chitungwiza City Council has been failing to provide water consistently to the area’s crowded townships for over eight months.

“The water situation is bad,” 21-year-old Chitungwiza resident Fortune Magaya tells Al Jazeera. “Water only comes on Saturdays for a few hours. But not at all times. On some Saturdays, it doesn’t come.”

When it does flow, people stockpile as much as they can. If they run out while the taps are running dry – which is often the case – residents face a difficult choice. They must either queue at a borehole, or buy water at extortionate prices.

Magaya says he buys around 40 litres of water a week for himself and his family, but only for cooking. The cost, he says, varies according to supply.

Some of the area’s more affluent residents have hired private drilling companies to sink boreholes on their properties to pump and sell water to their less-fortunate neighbours.

A recent report by Zimbabwe Peace Project recorded a truck in Chitungwize selling buckets of water for 1.50 Zimbabwean dollars each ($0.0625).

But since most of the boreholes use electric pumps, prices can double when the power is out. Blackouts can last up to 18 hours a day in some parts of Zimbabwe.

“It pains us to buy water the way we do now,” says Magaya.

Increasing water scarcity is compounding the myriad hardships with which Zimbabweans are wrestling – including a foundering economy, soaring inflation, growing food insecurity, and a deeply compromised public healthcare system.
Zimbabwe’s water crisis is rooted in a severe drought that began in 2018. Though some parts of the country experienced a brief respite in January with sporadic rains, more earth-parching weather is forecast for this year.

Access to clean, potable, affordable water is essential for maintaining individual and public health. When people face barriers to obtaining safe water, it can have negative economic and social effects as well.

In Zimbabwe, citizens are scrambling to get enough clean water to drink, prepare meals and attend to basic hygiene.
In 2008, Chitungwiza was the epicentre of a nationwide cholera epidemic linked to poor water sanitation. Now, residents are fearful of the life-threatening conditions the current water crisis could create.

“At each house, there is an average of four or five families living together and sharing a single toilet. Each of the families have kids of their own. Without water, there is risk of diseases such as cholera,” Kaseke says.

Disease is not the only worry. Women and children are bearing the brunt of the crisis.

“The kids are not studying at all as they are now spending most of their free time in water queues at the boreholes,” Anna Mamombe, a 45-year-old homemaker, tells Al Jazeera.

There are also concerns over how the water crisis is affecting the social fabric of the area.

“Married women are spending the night at boreholes and they have been many fights between couples with others accusing their partners of cheating on them and using the water crisis as an excuse to sleep out,” Kaseke tells Al Jazeera.

“The young girls are also spending nights here with boys their age and some older. And it’s dark out here. They end up doing crazy things, and that is also worrying for parents.”

It’s not just Chitungwiza that is at the sharp end of the water crisis. In Harare, one million people are without running water. Two of the capital’s four reservoirs are empty. And one of the city’s main water treatment plants – Morton Jaffrey – has been idle since September, when it ran out of key chemicals.

Even before the drought struck, water shortages were common in Zimbabwe’s capital due to decrepit infrastructure and chemical shortages.

Relief beckoned five years ago, after the Export-Import Bank of China extended a $144m loan facility to the Zimbabwean government to modernise Harare’s water and sewer works.

But after $72m was spent with little to show for it, and with reports of corruption swirling, the rest of the loan was held back by the Chinese.

Zimbabwean President Emmerson Mnangagwa reportedly appealed to his Chinese counterpart President Xi Jinping to unlock the rest of the funding, but Harare government spokesperson Micheal Chideme tells Al Jazeera that the rest of the loan has yet to materialise.

The municipality takes in only 15 million Zimbabwean dollars in revenue each month.
And until the crisis abates, people like septuagenarian Sarah Zanga have little choice but to queue for water at a community borehole.

“I have four buckets and I have been here for an hour,” she said.  “I don’t have the strength to carry these, so my grandchildren will carry them after they pump.”