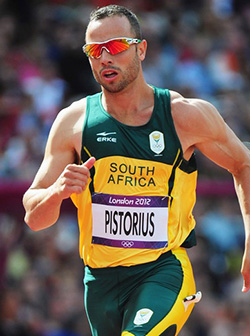 THE International Paralympic Committee have confirmed that Oscar Pistorius will be allowed to resume his athletics career despite being found guilty of culpable homicide.
Pistorius was convicted of the charge on Friday, having escaped the more serious charge of murder for the killing of his girlfriend Reeva Steenkamp.
The 27-year-old double amputee became one of the biggest names in world sport by not only dominating Paralympic athletics but also competing with able bodied athletes at the highest level.
Craig Spence, the IPC ‘s director of media and communications, said: “Oscar’s done a great deal for the Paralympic movement, he’s been an inspiration to millions, but obviously his priority now is to see (what) the judge decides.
“Then if he wishes to resume his athletics career then we wouldn’t step in his way, we would allow him to compete again in the future.”
The IPC’s chief executive Xavier Gonzalez admitted that Pistorius had been a “fundamental ambassador” for Paralympic sport but also insisted the movement had moved on.
“We have been very clear in differentiating our work from what was happening in the life of one individual.
“That will not change with the verdict today. The trial has not had any negative impact on the Paralympic movement. Since London with Sochi in 2014 we have seen an incredible growth in all aspects of our activities and we look forward very positively to Rio and Pyeongchang.
“Oscar was a fundamental ambassador of the Paralympic movement in the period between 2008 and 2012. Since then the Paralympic movement has many other ambassadors and many other athletes that have been recognised globally and we believe that will continue growing as we lead up to 2016.”

Pistorius has won six Paralympic gold medals and also won a silver medal at the 2011 able-bodied World Championships in the 4x400m relay.
In 2012, he competed at both the Olympic Games and the Paralympic Games in London – winning two golds and silver in the latter.
A statement from the IPC added: “Following (Friday’s) verdict, our thoughts remain with all those who have been affected by this terrible tragedy, in particular the family and friends of Reeva Steenkamp who sadly lost her life in this incident.”Advertisement

Judge Thokozila Masipa based her culpable homicide decision on the fact that Pistorius had acted unreasonably and negligently when he fired four shots from a 9mm pistol into a toilet door in his luxury Pretoria home, killing Steenkamp, who was behind it, almost instantly.
The state had argued that Pistorius was deliberately trying to kill Reeva Steenkamp, a law graduate and model, after a row in the early hours of Valentine’s Day last year, but Masipa ruled that prosecutors had failed to prove the allegations.
Pistorius said he had fired in the mistaken belief that an intruder had broken into his bathroom and was hiding in the toilet cubicle.