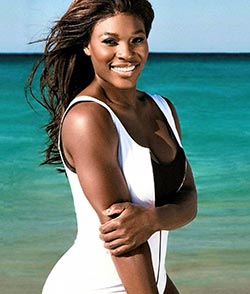 WORLD number one Serena Williams has said she could end her 13-year boycott of the Indian Wells tennis tournament after being inspired by Nelson Mandela.
The American 32-year-old and her sister Venus have not played the event in the California desert since being booed in 2001.
It followed Venus pulling out of their semi-final just minutes before they were due to play, citing injury, handing Serena a walkover into the final.
The capacity crowd was livid and made their feelings clear during the final against Kim Clijsters, booing Venus and her father Richard as they entered the stadium and Serena throughout the match.
There were even claims of racist taunts.
Serena met South African anti-apartheid hero Mandela, who died in December, and recently watched a film about his life.
Asked at the Australian Open whether his message of forgiveness and reconciliation could affect her thoughts about playing Indian Wells again, she said it had crossed her mind.
“Yeah, it actually crossed my mind a couple days ago, or after I saw the movie,” she said.
Pressed on whether it would convince her to play again, she replied: “Like I said, it crossed my mind not too long ago when I went to see the movie. I thought about it.
“Right now I don’t know. I just have to focus on this tournament.
“But I think Mandela was a really amazing man. I felt really honoured to have a chance to meet him, get to know him a little bit, and get to know his story a little better.”
Williams, who is gunning for an 18th Grand Slam title at Melbourne Park, cruised through her third round match against Daniela Hantuchova in straight sets Friday as she searches for a sixth Australian Open title.Advertisement