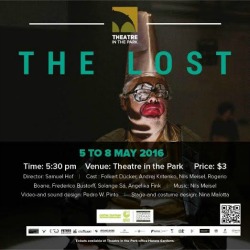 AN international theatre production The Lost from Germany is set for Theatre in The Park new venue in Harare Gardens.
The show will run as from the 4th to the 8th of May, with two days set for training workshops of local actors, producers, directors and the technical crew.

The Lost is a co-production between O-Team, Companhia de Teatro de Braga and Pathos München and was developed by O-Team in two phases in Portugal and Germany with a Portuguese, Mozambican, Ukrainian and German cast.
It is directed by Samuel Hof and the production managers are Tine Elbel and Katja Kettner.
The play is a theatrical creation based on world famous Franz Kafka’s The Lost.
The story of the anti-hero Karl Rossman mixes with theatrical and biographical material by the international team of artists.
Everyday life, the artistic process of creation and the end time vision of an author collide. The (artistic) crisis becomes an all-devouring black hole at the centre of the space.
The Lost is part of the two-year project cycle “Pathos Paradies”, which deals with the theatre as a utopian counter-proposal to the capitalist meritocracy.
O-Team is a professional independent theatre company. It was founded in 2005 as Team Odradek. In 2009, the name was changed to O-Team after several misunderstandings and spelling problems. O-Team is based in Stuttgart, Germany.
The cast: Rogerio Boane, Solange Sà, Folkert Dücker, Angelika Fink, Andriy Kritenko, Frederico Bustorff. Stage- and costume designer is Nina Malotta with music being provided by Nils Meisel with sound and video design by Pedro Pinto.
The play first premiered in October in 2014 at the Rodeo Festival Munich.
0-Team director, Samuel Hof, said his team are looking forward to travel to Harare, one of the major cultural centers of Africa.
“To present our theater production, ‘The Lost’ the play tells of the difficulties in the encounter of different cultures, but also of the chance to overcome these with the help of art.
“Therefore, I am eager to see how the reactions and the dialogue with the audience will be in this beautiful new venue – the Theater in the Park. Thanks to Rooftop Promotions for this invitation.”
Rooftop Promotions producer, Daves Guzha, said the coming in of The Lost from Germany will also cement the relationship between Harare and Munich. He said the new venue will have a series of firsts from different continents.Advertisement

“The venue will also play a critical role as a catalyst for unbridled growth of various theatrical products and musicals from within Zimbabwe, SADC region, Africa, Asia and Europe.
“Two weeks ago we have hosted ‘The Taking’ by Homegrown Arts from Bulawayo and that was our first production outside Harare, and then last week we had ‘A Love Song for the Impotent Son-in- Law from Zambia our first regional play and The Lost from Germany will be our first international play.
“This is in line with the organization’s vision: To be Southern Africa’s leading provider of home-grown artistic initiatives by 2020 and will hope this will also help to promote brand Zimbabwe, Theatre in The Park through arts tourism, and encompass the City of Harare Vision of having a world class city by 2025.”