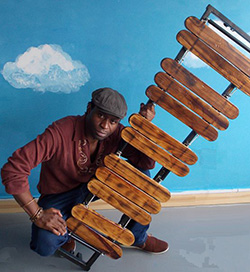 UK-BASED Zimbabwean filmmaker Lawrie Zidyana recently caught up with Kudaushe Matimba, a member of the legendary Bhundu Boys group in London.
Matimba and his band Harare were performing at London’s Jazz Café.
Zidyana talked to Matimba as part of his series of films profiling diaspora Africans who are promoting their culture and identity.
Matimba continues to perfom around Europe and teaching Zimbabwean music and culture while Bhundu Boys founder Rise Kagona also has his own a band in Scotland.
On its website, the band Harare says its “music is about social awareness, life yesterday, today and tomorrow, advice, respect, love for one another and compassion.
“It expresses emotions such as pain, love, wisdom and rage. Words to the songs are performed in the Shona language of Zimbabwe.”
The group adds: “Kuda brings both old and new compositions and arrangements to the Harare set. Their powerful and vibrant stage-shows have an unstoppable momentum guaranteed to fill the dance floor.”
For more of the band Harare’s music visit the group’s website – http://www.hararemusic.com/
Watch Matimba’s interview below:
Advertisement