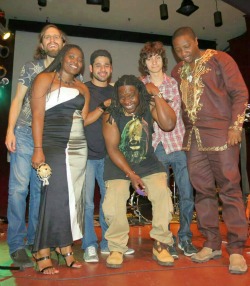 SUMMER is finally here in Canada, and a lot of events and outreach projects have been occurring within the Maple-Nation. All facets of Canadian lifestyle seem to have been infiltrated by Zim-Canadians making some sort of impressive strive or endeavour. This article focuses on a band currently bubbling in the underground airwaves within Canada and Japan where, when it comes to keeping deep Zimbabwe-Roots music alive their name rings bells. Micho along with Dande Showcase has been playing in Canada for the past three years and they recently released their first album “Bongozozo”. Tsungai Chipato had an opportunity to sit down and talk with Micho the leader of Dande Showcase, whilst they were currently on their “Bongozozo-Chaos Tour” across Canada.
TC: Can you explain a little into who and what, Dande Showcase is all about?
Micho: Dande Showcase is all about highlighting Zimbabwe Roots music from a global perspective. We compose songs and play them based on all the known traditional Zimbabwean beat patterns and chords. That is the foundation that we lay other things on top of. Half of the group is not Zimbabwean but they share the same view of the traditional Zimbabwean village teachings.
TC: Could you please elaborate on how foreigners come to understand the true meaning of Zimbabwean culture and teachings?
Micho: That’s exactly the point, when our ancestors came up with allegory and teachings they were meant to be universal. Most people get caught up with their bread and butter issues that they never stop to really sit down and think about what they truly want in life. The beauty of Zimbabwean traditional music is that it is actually universal, which then makes it easy for other cultures to either dismiss or incorporate into their own ideologies.
TC: So what does that have to do with having a Scottish guy as a bass guitarist or a Brazilian guy as your drummer?
Micho: Our ethos is the same, only language and geography separates us. We understand that we are all “vana vevhu”. What we don’t understand we teach each other.  We all traced our individual genealogies and came to realise we were all brothers just long lost from understanding each other. Zimbabwean traditions, with the right prism, can filter out all the obstacles in life.Advertisement

TC: What are your influences in music when you are in the studio?
Micho: Anything that stirs the soul is an influence, however if I had to hammer down Dande influences I would have to mention Ambuya Dyoko, Old School reggae like Skar, Bhundu Boys, Jonah Sithole and Peter Tosh just to mention a few, however the list is endless.
TC: Which current Zimbabwe artists are you currently listening to?
Micho: Good question, I’d have to say Linos Magaya, Kuda Matimba and Hope Masike however there a couple more that I can’t name right now off the top of my head
TC: What made you pick Dande as the name of your band?
Micho: The word Dande has evolved within the Diaspora to mean so many things. I am actually from the Dande area and living within the Diaspora I have seen how the word means so much to Zimbabweans; for different reasons. It is ambiguous in a good way, that’s partly why we chose it.
TC: Can you tell us a little more about your tour, how is that going?
Micho: The tour is not yet hectic the play dates have been spaced out so far. We had gigs in London, Hamilton, and Kingston, of course several in Toronto. Later on this summer we are heading to Alberta and Vancouver we finish off the tour in Manitoba.
TC: I noticed that you have a tribute song to Ambuya Dyoko on your set; do you do that at every show?
Micho: Yes we do, it’s our own small way of paying tribute to a legend and as well as educating the masses.
TC: Toronto is currently in the festival season and I know your band has been doing the rounds can you tell us a little of your experiences?
Micho: Well we’ve done three festivals so far this summer. Our best one was the Muhtadi Drum Festival, the vibe was just right; it felt good having other African cultures giving props to the drum making and playing skills that originate from Zimbabwe.
TC: What finally made your band decide to crossover and make an album?
Micho:We simply got tired of playing to people who understood our music. We were looking to convert people to Zimbabwe-Roots music in a language they could understand or at least be interested in learning. There is this misconception that mbira/drum music is for eclectic liberal people, or hippies. This is far from the truth and we want to highlight it.
TC: There are rumours that your group might be nominated for an award this year in Toronto, do you have anything to comment on this?
Micho: No, if it happens it happens, we are all about the music.
TC: Thank you for taking the time to sit with me, is there anything you want to say for the Zimbabweans reading this article today?
Micho: All I can say is that don’t be confined by your Zimbabwean-ness, it is who you are. Not everyone is traditional however we each contribute in our own way, don’t think about situations just do what you feel!
Tsungai Chipato is a journalist and blogger based in Toronto Canada. He can be contacted at mugaradzakasungwa@gmail.com