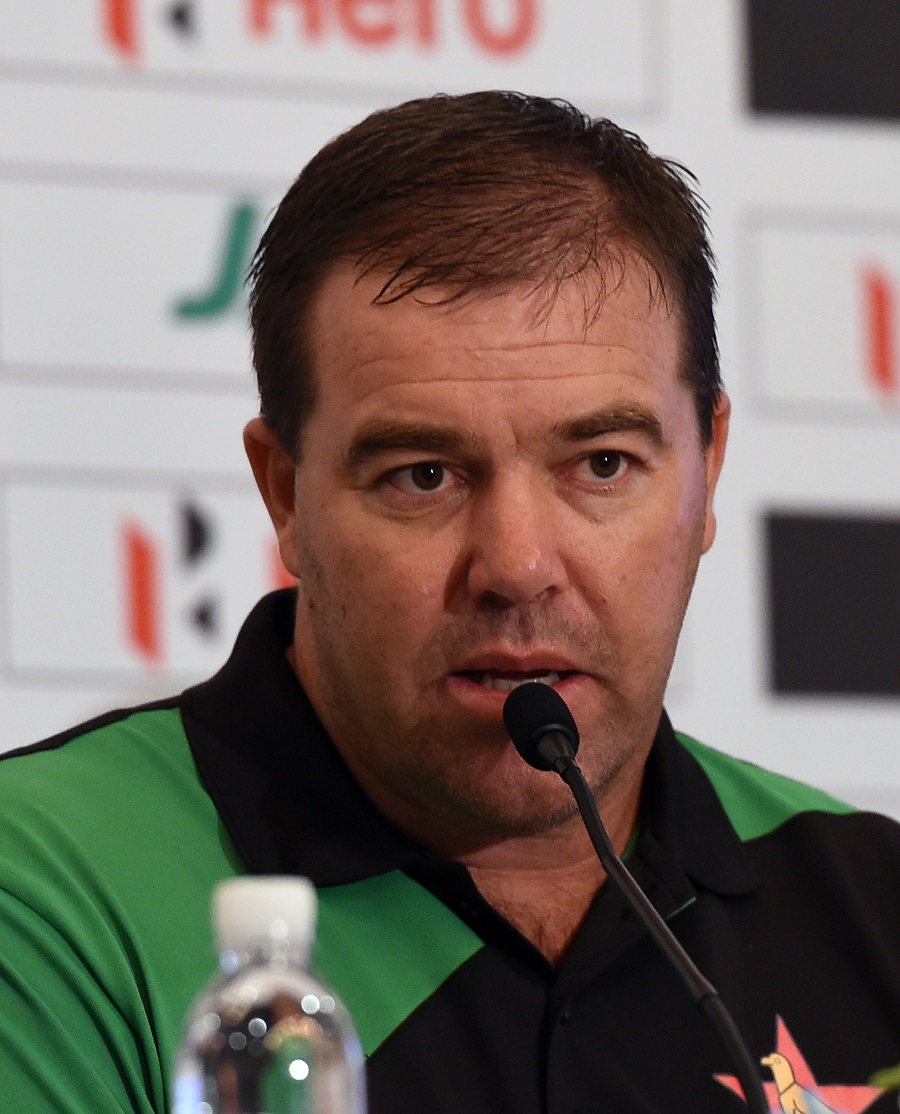 HEATH Streak is a busy man these days. He’s back playing cricket in the recently concluded Masters Champions League in Dubai where his team Leo Lions ended up as runners-up. He is the bowling coach of Bangladesh National team and will soon be joining Gujarat Lions as a bowling coach for the upcoming Indian Premier League season.
Talk of Heath Streak and the first thing that comes to mind is that Golden age of Zimbabwe cricket in late 1990s and early 2000s. The all-rounder was a crucial part of the team that put Zimbabwe onto the cricketing map. Arguably one of the best bowlers Zimbabwe ever produced, Streak’s career was a roller-coaster ride marred by administrative problems which brought an abrupt end to a career that promised more.
Streak ended as the highest wicket-taker in Tests and ODIs for Zimbabwe. He also had a Test century to his name and captained Zimbabwe in 21 Tests and 68 ODIS. Streak announced his retirement from international cricket in 2005 at the age of 31. The Zimbabwe all-rounder started off his coaching career in 2009 when he took up the role of bowing coach for Zimbabwe and continued till 2013.
In 2014, he signed up as bowling coach for Bangladesh and this is when he came to prominence as he helped a struggling Bangladesh team achieve remarkable results in ODIs which included an impressive showing in the World Cup 2015, and series wins over India, Pakistan (the famous Bangla-wash) and South Africa at home. Throughout this period, it was Bangladesh’ pacers that outshone the spinners which was a rare occurrence in the past.
Firstpost caught up with Heath Streak, where he talked about the golden era of Zimbabwe cricket, his career, bowling to Sachin Tendulkar at his peak, his coaching style and problems facing Zimbabwe cricket.
BELOW IS PART OF THE INTERVIEW:
What made you get back to playing cricket?
The MCL is exciting for people like me who have retired from cricket but I am still able to play a little bit of cricket at a reasonable level. It hasn’t been long since we stopped playing as professionals so I think it’s a fantastic idea that everyone seemed to have enjoyed and the cricket was pretty competitive. When you finish playing cricket, you always wish you were back on the field, your desire to play never stops.Advertisement

Speaking of India, there is one moment which is etched in minds of almost every Indian fan – Sachin taking apart Olonga in Sharjah, what are your memories of that match?
My memories of that match was I came on as the fifth change bowler that day. Campbell was the captain at that time and I had opened the bowling against Sri Lanka in my previous game but in the next match against India, Olonga opener the bowling and he bowled really quick and bounced out Sachin. And of course we discussed that this was the weakness we can exploit and bowl really aggressively. When he first comes in, we’ll unleash Olonga and bowl short at him but of course he had thought about it and apparently had gone in the nets and was sitting in his room practicing pull shots. So when we tried to execute our plan it didn’t work too well. I think we had scored only a 180 odd (196), it wasn’t a big run chase either for them so they could afford to come out and play aggressively and as Sachin can only do, he took us apart.
Were you surprised with his approach?
Not really, he’s such a great player, so we knew that he’s not just going to go to his room and not think about how he’s going to play next. He is not just talented but also a good thinker of the game. He understands how the opposition are trying to get him out and what he can do (to counter) knowing the conditions at hand. That’s the thing we all admire about him. And of course it was a very good batting wicket so it wasn’t easy, I’ve bowled plenty of times on that [Sharjah] wicket not just to him but to the likes of Shahid Afridi who at that stage of his career was scoring lots of runs.
So after the match did Olonga say anything in the dressing room?
We all sat in the change room and said ‘Jeez! What do you do when someone as good as that just decides he’s going to bat like that!’ It just felt like he could do whatever he wanted. He could hit the ball anywhere he wanted anytime at will. Sometimes you get these sort of innings where you just think that whatever you do or whoever bowls at him is going to make no difference.
You’ve been doing a really good job with Bangladesh as a bowling coach, can you elaborate on your coaching style? what kind of a coach are you?
I’ve always liked to think of myself as someone who is easy going and approachable. My thing is to understand the personalities and what makes individuals tick. There can be a massive contrast in the way you manage different personalities. Yes, you’ve got to be consistent but you got to be able to treat people differently. People are driven in different ways, some people are motivated by pushing them hard, others need a little bit more support, so understanding that as a coach especially at elite level is biggest thing. We do a lot of analysis on opposition, conditions, specific field, grounds and venues that we are going to play at and how we can exploit weaknesses of the opposition.