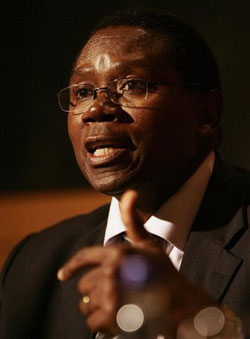 Mavambo-Kusile leader Simba Makoni was a guest on SW Radio Africa’s Hot Seat programme. The former finance minister talks to reporter Violet Gonda about the economy, criticism of his party and possibilities of forging a coalition with other parties ahead of general elections:
Broadcast: April 25, 2013

SIMBA MAKONI: Thank you very much indeed, good day to you.
GONDA: There are certain sections in the Zimbabwean society who feel you should be charged with treason for saying that President Mugabe and his party are responsible for the brutalities being suffered by Zimbabweans now than what was experienced by Rhodesians under the Ian Smith regime. Did you say this and if so, what makes you say this when many Zimbabweans are saying that life is a lot better now?
MAKONI: What I said was the Rhodesians did not set upon their own in the manner that we are doing. That was the comparison I made. Then I made another comparison which said in Rhodesia we lived in fear, in Zimbabwe we still live in fear. I even said President Mugabe himself lives in fear of losing his position. The dominant force afflicting people in Rhodesia was fear and in Zimbabwe it’s still fear. But coming to your direct question, I don’t believe there are sections of Zimbabwean society who believe I should be charged for treason. There was one person – I feel pity for her because obviously she doesn’t know what makes treason. As a learned person who is teaching at a high institution of learning, probably she needs to take time to educate herself on what exactly makes treason. Having a different view and even having an opposing opinion, nowhere in the law makes treason.
GONDA: Right and just going back to one of your points where you said that in Rhodesia there were no Rhodesians who set upon their own. Others would argue that there were some white Rhodesians who were victimized because they supported the nationalists.
MAKONI: Well I think we want to establish the facts. I did not dispute – I was at one with some of those white Rhodesians but there were white Rhodesians who formed opposition parties to Ian Smith’s Rhodesian Front; they were not arrested, they did not suffer violence, they were not long sleeved, short sleeved – it’s the degree of victimization if you want to call it that. But yes certainly whites who were with the nationalist movement, some of them were sent out of the country, others were put in prison but the degrees are different from what we are talking about. If you look at some of the brutalities that we have meted on our own, there is no comparison.Advertisement

MAKONI: Oh I can’t count them. Too many to count.