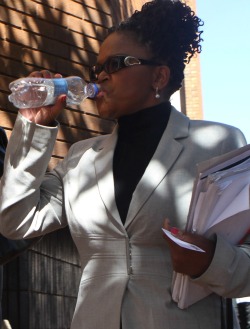 PROMINENT human rights lawyer Beatrice Mtetwa – currently on trial for allegedly insulting the police while trying to defend her clients – was in London recently to launch the film about her work in Zimbabwe, ‘Beatrice Mtetwa and the rule of law.’ She spoke to SW Radio Africa’s Violet Gonda about the rule of law ahead of elections at the end of the month and explains how ‘the abnormal has become normal.’  Mtetwa also gave her views on the independence of the country’s Constitutional Court judges and explained why she feels the MDC formations do not help their cause by often failing to respond to the machinations of Zanu PF are going and responds to criticism that she is driven by fame and money.
VIOLET GONDA: My guest on the Hot Seat is prominent human rights lawyer Beatrice Mtetwa who was in London recently for the official screening of her film “Beatrice Mtetwa and the Rule of Law”. Welcome on the programme Beatrice.
BEATRICE MTETWA: Thank you Violet.
GONDA: First of all, what is your main take-away from this film?
MTETWA: It’s a film that I’m hoping will really be used as an advocacy tool in any country where there’s a rule of law deficiency. Although Zimbabwe is being used in the film, the story there could be in any other country really. So I’m hoping that it might help advocacy on rule of law issues and how lawyers can play a role in trying to restore the rule of law.
GONDA: You actually say in your film that President Mugabe and Zanu PF have always engineered the legal and judiciary system in their favour; you said: “Unlike a lot of other dictators, Robert Mugabe doesn’t just go out and do what he wants. He first goes to parliament and passes a law and when you say ‘hey you can’t do that’, he will say that is the law.” Can you elaborate?
MTETWA: Well, we have seen many unjust laws being put in the statute books to say that this is the law. You take for instance AIPPA which resulted in many journalists having to leave the country and many media houses being shut down. Everybody knows that, that law ought not to have been really passed and that it ought not to have withstood constitutional scrutiny. It is an unjust law but it was meant to target a specific group in the media industry. And we have many such laws which were used including the laws used in the appropriation of farms. So you find that what was illegal yesterday automatically becomes legal today because the law now says so regardless of how unjust and how unconstitutional that law is.Advertisement