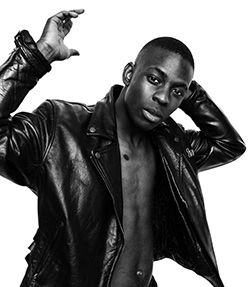 BORN in Zimbabwe but now Auckland-based, Mzwetwo (pronounced mez-way-two) has quickly established himself as a bold new figure on the local rap scene. Previously known and critically acclaimed as Loui The ZU, the 22-year-old released his first EP, titled Gallantino, as Mzwetwo in 2013.
After spending a couple of years planning his next move and fleshing out his work, Mzwetwo released a slick and artistically anarchistic music video for his single ‘Young Stunna’ last month. Fuelled by the right balance of ambition and dedication, the artist is gearing up to play two shows with fellow rapper and friend Tapz across Auckland and Wellington next weekend. Ahead of his gigs, the rapper sat down with UTR to discuss his vibe, ambitions and where he wants to go with his music…
First off, why the name change from Loui The ZU to Mzwetwo?
Mzwetwo is my birth name and I felt it was really important to do music under that due to the symbolism behind it. Zu was a name that people gave me because they couldn’t pronounce my real name. When you’re a teenager you get influenced by people and I think that name reflects that. I feel it’s important to create your own identity – you decide who you are and what you do.

You went over to the States recently for a bit, how did you find that?
That shit was crazy. Trump was running for campaign when I was over there – it gave me a full perspective of what its like to be a black person in a different context.

Are you looking to travel much more?
Definitely, the UK is where my heart is. I feel the UK’s taste palate is a little more eclectic than the US – everything is a bit subtler and slower paced. That attracts me a lot. Just look at grime music – there is a lot of syncopation in grime music while American hip-hop is very straight on the beat.

That’s an interesting observation, what kind of music do you dig and draw inspiration from?
I love hip-hop. It’s relatable and what I experience everyday – especially being a black person. So I kind of live hip-hop but I’ve always been inspired by rock ‘n’ roll. Rock music has a lot of heritage – you can see the phases it went through – from 60s folk to heaps of mega bands in the 70s through to the 80s and to now. I care about heritage a lot. I don’t want to do anything that doesn’t pay mind to heritage or have intention. I feel like my music is a dialect of hip-hop and rock. Because it’s new there is nothing to follow. I have to learn slowly and connect the dots.Advertisement

Can you give us the run down on your single ‘Young Stunna’…
‘Young Stunna’ is inspired by punk music. Punk and hip-hop to me are very similar – the two genres are like ‘fuck that, fuck everything – this is what I want’. ‘Young Stunna’ is an anti-everything kind of expression.
I remember vividly when I made it. I was down at the skate park and when I went home it was such a pivotal moment when I sat down and started the first chord. It was putting my ideas into action. My skill set didn’t match my vision so I tried to get people to help me with it but that didn’t work out. So I thought I’m just gonna help myself.

Is there much of a concept behind the music video?
In the music video, the girl represents contemporary pop culture. So I am wooing this girl and she kind of resists at first, and is like ‘nah, who does he think he is’. The crux of it is that she is consumed by my vision and burning with passion. It’s kind of like a foretelling and what I hope to do to culture. I place lots of value on intention and added value – like why should you waste your time watching this.

Your whole vibe indicates you’re pretty ambitious – what does success mean to you?
To me, success is about happiness. I remember when I was younger I was so focused on the future, more so than I am now. It’s about balancing where you’re going with what you have – that’s success to me because it’s all about the journey. Looking back at heritage and hip-hop and rock ‘n’ roll in context, we have so much to learn from and so many tools to use nowadays.
I’d also like to play arenas when I’m alive. I don’t want people to be like ‘damn, this guy was genius’ when I die or something. When you first start up it’s up to people to decide whether this shit is genius or this shit is weird – so it’s all about placing everything right. I made ‘Young Stunna’ four years ago and I’m not in a rush – I’m patient with people’s taste. There’s no excuse to make a shit beat. Just take your time with it – start and get better. Not everything is about immediate success.

With a couple of shows lined up for May with Tapz you’re well on your way….
Yeah, it’s our first show together and we are so grateful for everything. It will be the first Gallantino experience show. We always name our live events ‘experiences’ because we want the show to be a sonic, visual and music experience.