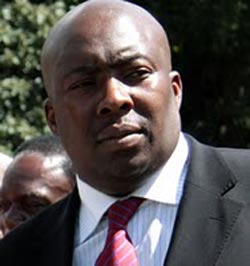 ZANU PF political commissar Saviour Kasukuwere has been linked with a group of Zanu PF ‘mafikizolos’ angling for full control of the party. He is said to harbour presidential ambitions and accused of corruption.
His link with the mysterious Baba Jukwa Facebook character which posed as a Zanu PF mole has also been a PR setback for the wealthy environment minister.
NewZimbabwe.com’s chief reporter Nkosana Dlamini (ND) rang up Saviour Kasukuwere (SK) for his responses on these and more issues. Below is the transcript of the conversation.
ND: Briefly who is Saviour Kasukuwere?
SK: He is a Zimbabwean.
ND: What distinguishes him from any other Zimbabwean?
SK: Nothing. That’s why l said l am a Zimbabwean.
ND: How did you earn the nickname Tyson?
SK: You see; you don’t earn a nickname; you are given a nickname. I think that question would best be answered by those who gave it to me.
ND: Your critics say it is because you are tough and combative in your conduct. Do you agree?
SK: That’s what they observe and they are entitled to their opinions. In fact, they say a lot which l don’t worry so much about. I am a very quiet person.
ND: Its now several months since you became Zanu PF political commissar, how has life been so far?
SK: The going has been very good. The party is very strong. We won by-elections and we are set to win many more by-elections. Zanu PF has never been this strong. We have emerged from a period where there was internal destabilisation. We have weathered the storm of the regime change agenda.
ND: Do you find your job as Zanu PF political commissar any tougher than those of your predecessors given the current happenings in Zanu PF?
SK: What my predecessors experienced and what I am experiencing are two different things. I don’t know what they experienced because l was not part of them. But my assignment is simple. The key objective being to ensure that the party is strong and to win the elections and we are doing that. So my tasks and objectives are gelling in well and we are winning. What with (Tendai, MDC Renewal) Biti running away from the country and MDC finished.Advertisement