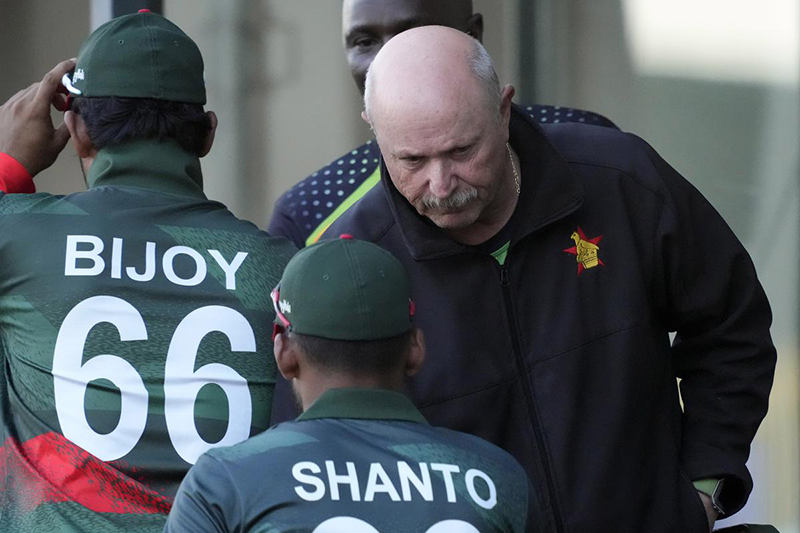 By Interview by Danyal Rasool I espncricinfo.com

A few months ago, Zimbabwe cricket was at its nadir, their most recent ignominy a crushing home series clean sweep at Afghanistan’s hands. In a bid to try and stall the side’s downward spiral, Zimbabwe Cricket appointed former captain Dave Houghton as head coach. Since then, the team has enjoyed an astonishing revival, going unbeaten in the T20 World Cup Qualifier to book their berth in the tournament proper in Australia, following it up with T20I and ODI series wins against Bangladesh.

Here, Houghton speaks about the method behind the side’s reversal of fortunes and his plans for Zimbabwe cricket.

Let’s talk about the T20I series win against Bangladesh. What did that tell you about this Zimbabwe side?

Obviously we’re delighted to take that T20 series, and in the way we won it, which showed great spirit. What was key for me was that we attacked from bad positions in both the second and third matches, something we wouldn’t have done in the past. We’ve also used a number of different players through the series and that’s part of my effort to broaden our base. So that is hugely encouraging.

While the standard of opposition wasn’t as good [as Bangladesh] in the [T20 World Cup] Qualifier, the amount of pressure upon us to qualify almost made up for it. The biggest thing for me, though, is that we played [against Bangladesh] with the same intensity and fearlessness as we played those qualifiers. And if we can bring that to the table during these games, I think we will be a very good challenge for most sides.

You’ve had an instant impact after coming in at a low ebb for Zimbabwe cricket. Why do you think that happened?

I knew the guys pretty well. I was involved last year with local franchise cricket coaching, so I knew the players and what I’d seen last year is that there’s some very, very talented and highly skilled players. But when they play for Zimbabwe, they don’t seem to want to get their skills out.

All I’ve done up until now is basically said to them that I want them to play fearless cricket. There will be no recriminations if they make mistakes. Making mistakes is a good way of learning, but I want them to go out and play with their skills, because we’ll never know how good we are until we actually put our skills on the table. I think that has been the turning point. We’ve gone out and we’ve played a good, aggressive brand of T20 cricket in particular. And some of the people that watched this were quite amazed at some of the skills our players had. It purely and simply was about them having too much fear of failure. They just weren’t able to actually play to their potential.

Sounds like there are some parallels with what Brendon McCullum seems to be doing with the England Test side.

I think he’s a slightly bigger name doing it with a slightly bigger team. It’s nice to have that comparison, but I think I have a way to go first. Let’s see how we go in six months’ time, when we’ve got through Bangladesh, India and Australia, which are some tough, tough teams, and then the World Cup, and then we’ll see if changes are made and progress has been made.

What did you think you needed to change from Lalchand Rajput’s time and in what areas did you think Zimbabwe were going down the wrong direction?

It [would be] wrong of me to criticise any previous coach. But I think that the team had become accustomed to losing. And unfortunately, as much as winning is a habit, so is losing, and it can be quite hard and frustrating as a coach to try and get that to change. The board realised that as well, and made the change for Lal and myself to try and get a new voice into the change room to see if we can get an about-turn to that losing habit. But as I said, it’s been purely mental. There’s no time between now and when we get back from Australia to actually do any technical work.

Did you also have different views on selection? Sikandar Raza and Sean Williams were being moved on and then they went on to play an integral role in the qualifiers?

I think in every side you need a semblance of seniority as well as your young up-and-coming players. We have a nice blend. Sean was injured for a long time and that was a shame. But it’s great to have him back. He really is a big player in our team. And so is Sikandar, and both of them are very senior, very experienced. Their cricket may have dropped in the last few months prior to me arriving, but since I’ve come back in, they’ve been mainstays of our side and have played brilliant cricket. Once these games are out of the way, I’ll go and look at the franchise systems and see what [talent] is coming up in four or five years’ time that’s going to replace our senior players.

Some of your key players are ageing. Are you confident you have quality coming through the ranks to replace them?

We’ve got five franchises right now and they’ve got about 20 people on the staff in each franchise. The standard is very much at the same level. You could probably take ten of the squad of 15 I’ve got now and change them with another ten and have no difference.

The difference is the lack of match-winners. When I go back to our past and you look at when the team was playing with Andy Flower, Heath Streak, Grant Flower, they were a head above the rest of the group and could win you matches on their own. There were always a number of players who were match-winners. At the moment we don’t have those match-winners, but we have a very big number of good players all across the same level. And I’m hoping that some of the youngsters coming through now, with the experience they’re getting, will in four or five years become those match winners.

Is it frustrating to lose a lot of Zimbabwe’s best players because they go abroad?

That’s nothing new. We’ve been losing those guys since 1980. When we first became independent, we lost Brian Davis, who went off to Tasmania and then in the nineties we lost Graeme Hick and Kevin Curran. It’s been going on for ages and you can’t stop people going off and playing elsewhere. But I think there’s more than enough guys to give us a serious, decent side over a number of years.

There have been reports that you could play a role in bringing some of the players who’ve gone to England, like Ben Curran and Gary Ballance, back to Zimbabwe. Is that an opportunity you’re exploring?

I don’t think that we’ve ever said anybody who goes and plays elsewhere can’t play for Zimbabwe. The biggest thing is letting them know they can come back. So you drop them a line and say, this is an option for you. But they must want to come back to play for Zimbabwe. This is not a case of us going out there and throwing contracts at people who haven’t broken the world where they are anyway. They can get involved in the franchise system and if selected, play for Zimbabwe. There’s nothing action-wise with specific players going on at the moment, but I have told the guys the door is open.

Do you think Zimbabwe’s player pool is too shallow right now?

I would agree with you but for the fact that when I played Test cricket, we had a player pool of about 15 people, and we managed to hold our own against India and a few others. What I see now, with five franchises playing good professional cricket all year round, is that it’s quite substantially better than it used to be. There’s always room for more, and I’m sure that’s part of Zimbabwe Cricket’s logistical plans going forward – to get more schools playing, resurrect some of the old school grounds which are still there but need to be redone. And get more facilities, because there’s such an interest in the game it’s amazing.

How well placed is Zimbabwe cricket from a financial point of view to cope with the bigger sides over the years? How can they remain competitive at the very top level with a much smaller budget?

I don’t really know a lot about the Zimbabwe budget. I know that we were in debt certainly five years ago. The new chairman Doc Mukuhlani [Tavenga Mukuhlani] came in and, with the help of the ICC, put in a lot of austerity measures over the last five years, trimmed the number of people working in the company [ZC] but still managed to maintain a fairly high level of domestic first class cricket.

The end result of that is, I believe, that we are now out of debt completely. And at the most recent ICC meeting they have now decided that we can actually control our own funds again. For a long time, the ICC were distributing the funds for us. We’re in a good position to not only maintain and improve as a cricket team, but also to maintain and improve as a cricket nation.

For a period in the last decade or so, Zimbabwe Cricket was viewed as a place with a somewhat dysfunctional, even toxic, workplace culture. Do you detect any of that now, and how do you find this work environment?

I can’t really comment about six or seven years ago, but I’ll tell you that when I look back over my 40-year career with Zimbabwe, probably 18 to 20 years as a player, this is probably the best I’ve ever been treated. And [I’m working] with some of the nicest people I’ve ever worked with. If there was some toxicity some years ago and rumours creeped out about that, it certainly hasn’t affected me. The people that I work with now are open all the time to suggestions on how we can improve. They’re absolutely fantastic.