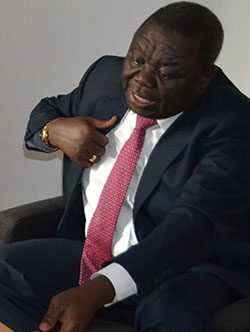 FORMER Prime Minister and MDC-T leader Morgan Tsvangirai was last week in London to address a conference at Oxford University on the extractive industries and democracy in Africa. He also found time to discuss where his party is with regard to putting together evidence proving the July 31 elections were fraudulent, whether or not the MDC-T would contest future elections and his own position as party leader. The MDC-T leader spoke to NewZimbabwe.com’s Gilbert Nyambabvu.
Gilbert Nyambabvu (GN): It’s now nearly three months since the July 31 elections. Your party said it was putting together proof of the fraud it alleges was carried out, how far have you gone with that?
Morgan Tsvangirai (MT): We are putting the evidence together but you must understand that it’s like asking the thief to give us evidence of his guilt and this particular thief is no fool. We must realise that was not an election because votes did not have a choice. Although the process was peaceful the outcome was predetermined long before the supposed vote itself. We are asking ZEC to provide us with the information, to explain and show us the process by which they came up with this outcome but they will not. We are asking them what happened with the two million extra ballot papers but no one will say. All the voting material has been moved to the KGVI, and it’s inaccessible.
GN: You publicly backed the appointment of Justice Rita Makarau as ZEC chairperson – in fact we understand she was put forward by the MDC-T. After what you say happened on July 31, do you regret the choice and should she continue in the role?
MT:  Well, Justice Makarau was not in charge of the whole thing – we actually pity her. The fact of the matter is you could have put God there and even HE would have been defied – that is how determined these people were about retaining power. ZEC had no role at all – it was the secretariat which is headed by an ex-CIO operative, controlled by the military. Whether or not Justice Makarau should continue in that role is a matter for her to decide but she must accept that she was not in charge. Even the civilian Zanu PF party was not in charge – the whole thing was controlled and directed by the military, by the CIO. That is why we still have Zanu PF candidates who tell us, today, that they have no idea how they won. Notice how none of those who claim to have won can even celebrate –they know they did not, actually, win. The economy itself has not experienced any post-election bounce from this supposed landslide; if anything we’re going back to 2008.Advertisement